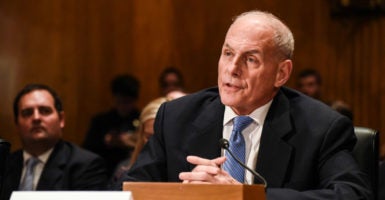 On Tuesday, retired Gen. John Kelly, the nominee to be secretary of homeland security, went before the Senate’s Homeland Security and Government Affairs Committee for his confirmation hearing. Here are the top three takeaways from that hearing.

1. The Department of Homeland Security’s management and morale are a top focus for Congress and for Kelly.

Multiple senators from both sides of the aisle asked Kelly what he intends to do about the core management issues facing the Department of Homeland Security. Drawing upon his past experiences and style of leadership, Kelly clearly stated that he intends to take a comprehensive top-to-bottom review of the department.

He said that the disparate pieces of the department must be better united and efficient in working together. To accomplish this, he intends to instill a common sense of the mission of protecting the U.S. homeland across the department.

Furthermore, he noted the serious work that needs to be done to improve the crushingly poor morale at the department. Indeed, according to the Partnership for Public Service’s annual poll of “Best Places to Work in the Federal Government,” the Department of Homeland Security has consistently been rated the worst large agency to work for in the federal government.

Kelly noted that if the department is to be successful in its mission and to attract and keep the best people in the department, morale must be improved. He also said his department will be one that listens to and supports its employees, allows them to do their jobs, and builds an experienced acquisition corps.

2. Border security is more than a wall.

With his experience as the commander of U.S. Southern Command—which is responsible for U.S. military operations in the Central and South America region—Kelly talked about taking a “layered” approach to border security.

He said that his military experience led him to believe that physical barriers, such as walls, are not sufficient to stop illegal immigration or smugglers. Instead, Kelly talked about using technology to monitor the border and deploying personnel quickly to respond to illegal border crossings.

Notably, Kelly also said that “defense of the southern border really starts about 1,500 miles south,” emphasizing the importance of partnering with countries in Latin America to combat drug production and smugglers, as well as the violent conditions that can drive people to enter the U.S. illegally. He also clearly stated that good immigration policy requires that U.S. laws be enforced.

When asked about terrorism, Kelly emphasized the importance of preventing terrorists from ever reaching the U.S.

For the many cases of terrorism that are homegrown, Kelly said engaging with local communities is critical so that families and communities trust their local leaders and law enforcement enough to report suspicious or terrorist behavior.

Both answers indicate a proactive approach to counterterrorism that seeks to prevent terrorists from getting anywhere close to their target.

The Department of Homeland Security plays a key role in both aspects of combatting terrorism—foreign and homegrown—and it is important that Kelly adopt this preventative mindset toward terrorism.