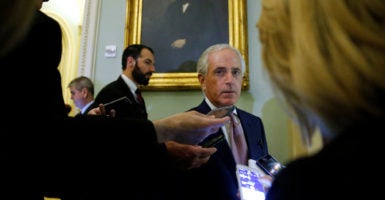 Republicans have coalesced around a strategy for repealing Obamacare using a budget tool called reconciliation.

But a divide has emerged among some Republican senators who, splitting from their conservative colleagues, believe they should delay a repeal of Obamacare’s taxes until a replacement plan is implemented.

On one side of the debate are Republican Sens. Bob Corker of Tennessee, Bill Cassidy of Louisiana, and Susan Collins of Maine who would like to leave in place the taxes—levied on insurers, medical device companies, employers, and individuals—included in Obamacare.

The revenue streams pay for Obamacare’s subsidies, which extend to Americans purchasing coverage on the federal and state-run exchanges, and the senators say the taxes are necessary to fund the subsidies further during a two- or three-year transition period after repealing Obamacare.

“Right now, the track we’re on, the repeal process is going to repeal all the revenues, but keep in place the subsidies for three years,” Corker said last week at a breakfast hosted by The Christian Science Monitor.

The Republican senators aren’t ruling out replacing the taxes altogether, but are advocating doing so later this year when Congress moves to reform the tax code using reconciliation.

“If we don’t like ‘em, we can replace them,” Cassidy told Bloomberg. “But we can do it in a way where you overall are lowering tax rates and making the tax code more efficient. There will be enough there for people to win.”

The senators’ push to keep Obamacare’s taxes in place temporarily puts them at odds with conservatives like Reps. Jim Jordan of Ohio and Mark Meadows of North Carolina, who believe their repeal should be done immediately and through the reconciliation bill that will roll back key aspects of the law.

“To look at any repeal of the Affordable Care Act without repealing the taxes would be something that would generally come out of a more liberal think tank than it would be from a conservative member of Congress,” Meadows told The Daily Signal. “Without a doubt, the taxes should be repealed.”

On the issue of the taxes, Meadows has a powerful ally in House Ways and Means Committee Chairman Kevin Brady, who said in an interview on Bloomberg TV on Tuesday that all of the taxes would be included in a repeal bill.

“Those taxes are causing real damage to families, to our small businesses, to the economy as well, along with the key mandates that drive up the expense of Obamacare,” he said. “All those need to be repealed immediately because look, Obamacare is getting worse.”

Meadows, chairman of the House Freedom Caucus, pushed back on his colleagues’ argument that the revenue streams are needed to fund a replacement for the Affordable Care Act.

Rather than fit a new proposal around the money raised by Obamacare’s taxes, the North Carolina Republican said he preferred a plan that involved crafting a replacement first, and then finding the revenue streams to support it.

“It’s a backward argument to suggest you put a pot of money out there and figure out a replacement to fit it,” Meadows said. “It would be more prudent to come up with a replacement, and then figure out the taxes that are needed to support it.”

But for some lawmakers, especially those who signed pledges not to raise taxes, it may be politically difficult to find ways to increase revenue for a replacement plan.

Meadows, though, said it’s a risk he’s willing to take.

“That strategy will always make you be a lot more conservative in the amount of taxes that you’re asking for from hardworking American taxpayers instead of just assuming you have a certain budget and spend all of that and then some,” he said.

Conservatives in the House and Senate have for years been pushing for Obamacare’s full repeal, and most say they believe that any reconciliation bill that leaves the taxes in place would fall short of their promise to the American people to roll back the law.

“Repeal it. Get rid of it, every single bit of it. Don’t keep any of it,” Jordan told Bloomberg TV earlier this week. “That’s all the taxes, all the mandates, all the things that are in this thing that the American people don’t like and that I think have driven up the cost of medicine, hurt economic growth. I think we’ve got to do what we told voters we were going to do.”

Plus, Senate GOP leadership can’t stand to lose the support of three senators, since a reconciliation bill needs 51 votes in the upper chamber to pass.

Already, Sens. Ted Cruz of Texas, Mike Lee of Utah, and Marco Rubio of Florida have sent Senate leaders a letter telling them they support a strategy to repeal Obamacare using reconciliation.

But the senators urged Senate Majority Leader Mitch McConnell, Majority Whip John Cornyn, and Budget Committee Chairman Mike Enzi to use a reconciliation bill passed by the last Congress as a floor for future reconciliation legislation.