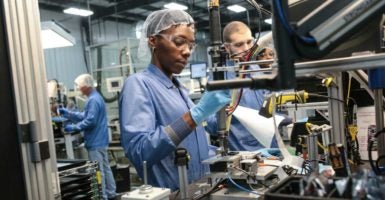 Yet the impact of Kentucky’s right-to-work legislation could move beyond the state’s borders.

Right-to-work laws prohibit employers from entering into agreements that make union membership and the payment of union dues a condition of employment.

The other big-ticket item eliminates the “prevailing wage” employers must now pay on work funded with public money. This involves construction work on schools and government buildings.

These laws could have a significant impact on the national debate over worker freedom. Kentucky is poised to become the 27th right-to-work state.

Nemes was elected in November along with a Republican wave that delivered the Kentucky House of Representatives to his party for the first time since 1921.

“I’m calling it promises made, promises kept because we ran on worker freedom, we ran on right-to-work, and we ran on paycheck protection and on repealing the prevailing wage law. We delivered in just the first week of the new General Assembly,” Nemes told The Daily Signal in a phone interview.

Kentucky labor unions, which held loud and boisterous protests in and around the statehouse in Frankfort, Kentucky, throughout the week and into Saturday, remain ardently opposed to the legislation the governor is set to sign into law.

UAW Local 2164, United Food and Commercial Workers Local 227, and the Kentucky State AFL-CIO are among the unions that expressed strong opposition to the right-to-work bill and other labor-related bills that passed Saturday.

“They don’t want to work for the working man and it’s sad but true but they want to fight unions every way they can fight us,” Monica Williams, president of UAW Local 2164, told The Daily Signal. “Unions are good for all people, not just for unions.”

From Local to National Debate

What happened in Kentucky is not necessarily going to stay in Kentucky. That’s because the 6th Circuit Court of Appeals, which covers districts in Kentucky, Michigan, Tennessee, and Ohio,  issued a ruling in November that upheld the right of localities to pass right-to-work ordinances in the absence of state-level legislation.

The action began in Warren County, Kentucky, in the fall of 2014 with 11 other counties following suit.

Jim Waters, president of the Bluegrass Institute, a libertarian, free-market think tank in Kentucky, said in a phone interview with The Daily Signal that Warren County’s decision to press ahead with its own ordinance certainly had an impact on what happened statewide.

“What this means is that we will no longer watch jobs and opportunities fly over or go around our state,” he said.

Waters pointed out that Kentucky’s largest border is with Tennessee, which is a right-to-work state, and four of Kentucky’s seven neighboring states are right to work: Indiana, Tennessee, Virginia, and West Virginia.

“$1 billion in capital investment has gone into Warren County since it passed right to work in December 2014. Yes, that’s B as in billion,” Waters said. “These are not prospects; these are commitments. When legislators in other parts of the state saw what was happening in Warren County, they certainly took notice. I’m not saying it was the factor in determining what happened statewide, but it was certainly a factor.”

Waters also said that there are 55,000 new job openings in a 50-mile radius of where Warren County passed its right-to-work ordinance.

“That’s not a coincidence,” he said.

“I do believe our county government initiative advanced the Kentucky legislative effort, as it created a public awareness, and helped to educate citizens about right to work throughout the state,” Mike Buchanon, the Warren County judge-executive, said in an email. “The entire state was amazed at the remarkable increase in new prospects that contacted Warren County immediately after we passed right to work.”

Kentucky is a great place for business. But the fact that we were the only state in the southeast U.S. that was not right to work kept us from being considered for a site for new locations by growing industries. Site selectors have told us that as many as 75 percent of their clients instructed them to eliminate any state that wasn’t right to work. That left Kentucky off the list of consideration, right from the beginning.

But now that right to work has passed, Buchanon said, the state Legislature can “post a sign over the commonwealth’s front door” that says “Kentucky is open for business.”

Kentucky’s local clashes over right-to-work laws may now have an impact beyond even the state level.

The drive for local right-to-work laws experienced a temporary setback in February when a federal district court ruled against a right-to-work ordinance in Hardin County, Kentucky. But the 6th Circuit ruling reversed that lower court ruling.

“One difficulty we had with the local ordinances is that it was a novel approach and people were cautious because they knew the unions were going to sue,” he said. “But the 6th Circuit ruling in very powerful language upholding these local ordinances, will give courage to other localities to pass their own right-to-work ordinances.”

Before being elected to the Kentucky House, Nemes served as an attorney coordinating the legal defense for the counties passing their own ordinances. He anticipates that Ohio counties will now be motivated to take up right to work. With the exception of Pennsylvania, Ohio is now surrounded by right-to-work states following the passage of the law in Kentucky.

James Sherk, a labor policy analyst with The Heritage Foundation, sees a potential for legal disputes over local right to work to move up to the U.S. Supreme Court, depending on how the 7th Circuit Court of Appeals rules in a case out of Lincolnshire, Illinois, where a federal district judge ruled against a local right-to-work ordinance.

“If all the federal appeals courts rule the same way, the U.S. Supreme Court typically does not step in,” Sherk said. “But if the 7th Circuit were to rule against the local right to work, then you would have a conflict between the two circuits and typically the Supreme Court steps in to create consistency in the law when you have two circuits reading it differently. The litigation out of Illinois could go up to the Supreme Court potentially.”

Spreading to Other States

Now that Bevin has put his signature to the Kentucky bills, the primary legislative battleground over right-to-work laws will have already shifted over to Missouri, where that state’s House of Representatives is set to hold hearings Tuesday on its own legislation. The Missouri Senate is expected to follow up with hearings on its own version of the right-to-work bill later this week.

Eric Greitens, Missouri’s newly-elected Republican governor, campaigned for right-to-work laws and it is widely expected that he will sign off on any new legislation that reaches his desk. Missouri fell just short of passing right to work in September 2015 when Republican lawmakers could not produce enough support to override then-Democratic Gov. Jay Nixon’s veto.

Grover Norquist, president of Americans for Tax Reform, and Matt Patterson, executive director of the Center for Worker Freedom, have come out in support of a Missouri right-to-work law. The Center for Worker Freedom is a special project of Americans for Tax Reform, a nonprofit taxpayer advocacy group based in the District of Columbia.

Norquist and Patterson signed a letter last week addressed to the Missouri General Assembly urging lawmakers to vote in favor of “right to work.”

“The towns and communities in Ohio that border right-to-work states are going to start feeling the pressure just as they did in Kentucky,” Patterson, the Center for Worker Freedom executive director, told The Daily Signal. “We are also going to see Missouri start to move very quickly on right to work with the hearings that come this week.”

Norquist and Patterson highlight key statistics in their letter as they make the case for ending forced unionization. They wrote:

Right-to-work states have seen an average of 68 percent greater job growth than the average of forced-unionization states, according to government labor statistics. In 2012, Indiana has seen its unemployment cut nearly in half since it passed its right-to-work law in 2012, from 9.1 percent in 2011 to 5.4 percent today. Currently, six of the eight states bordering Missouri are right to work, putting the Show Me State at a tremendous disadvantage. In order to boost its competitiveness and give Missouri businesses every advantage to grow and create jobs, lawmakers must do their part and allow them this valuable tool.

Sherk said he expects to see Missouri become right to work in another few weeks. He also said the 6th Circuit ruling makes Ohio a clear candidate for local right-to-work laws since several of those localities will now be bordering right-to-work states.

The example of Warren County, Kentucky, will not be lost in Ohio, he said. Within a few weeks of passing its ordinance, Warren County had 47 different development projects come its way, Sherk said.

“Warren County didn’t know it was missing out on these opportunities until it passed right to work,” Sherk said. “They didn’t know how many doors were being closed. A lot of Ohio townships and cities will look at this and will want to be part of it.”

If local ordinances do take root in Ohio, which is a strong possibility, Sherk expects that other localities will start to pass ordinances in those areas of the country where a statewide option is out of reach for the moment.

Since Maine has a “long and strong tradition of powers given to localities,” it’s possible that it might also act, Sherk said.

Looking ahead to 2018, he anticipates that Minnesota and Pennsylvania could consider new legislation if right-to-work candidates win the governor’s races in those states. Sherk also sees a potential for New Hampshire and Montana in the not-too-distant future.

But even if Republicans take governor’s seats in key states where the GOP is gaining ground, right to work will remain a tough fight, Sherk warned.

“In Pennsylvania, the Legislature is more conservative than it was but the caveat there is that the left has taken control of the [state] Supreme Court,” he said. “So, you could see some judicial high-jinx.”