In Revealing Article, Obama Puts ‘Progressive Goals’ Before Due Process 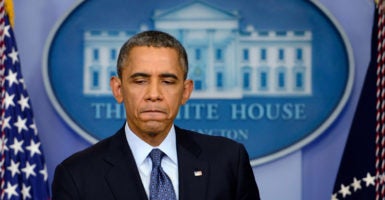 One glaring omission stands out: The article all but forgets the crucial need for mens rea (latin for “guilty mind”) reform to reverse the erosion of due process in federal criminal law. Thus, the commentary ignores the erosion of due process protections that are supposed to be afforded to honest Americans when it comes to enforcing criminal laws.

Mens rea is the fundamental principle that distinguishes between an accident and a crime.

In his expansive commentary, Obama briefly mentions that there are “important structural and prudential constraints on how the president can directly influence criminal enforcement.” But it omits mens rea as one constraint on the executive power to enforce the criminal law.

On the importance of this rule of criminal law, the United States Supreme Court said in Morissette v. United States (1952): “The contention that an injury can amount to a crime only when inflicted by intention is no provincial or transient notion.”

Far from it. The court continued, it “is as universal and persistent in mature systems of law as belief in freedom of the human will and a consequent ability and duty of the normal individual to choose between good and evil.”

In his commentary, Obama only mentions mens rea once (and in a footnote at that), calling it a “proposal … that could undermine public safety and harm progressive goals.”

Obama could not be more mistaken on the role for mens rea in our criminal justice system.

However, Congress and federal agencies “routinely produce criminal laws and regulations with weak or no intent standards,” sometimes deliberately and sometimes by simple omission.

These provisions may have proven to be an efficient and effective way to enforce “progressive goals,” as Obama puts it, but they often end up criminalizing conduct that no reasonable person would have assumed was immoral or illegal. Honest, otherwise law-abiding citizens have paid the price in the form of criminal prosecutions for morally innocent accidents and mistakes.

The federal prosecution of Lawrence Lewis is an excellent example. Lewis worked his way out of poverty whereas his three older brothers were murdered.

After working during the day and taking classes at night, he became the chief engineer at the Knollwood military retirement center. He enjoyed his work and was able to take care of his elderly mother and two daughters.

The Knollwood center had a recurring sewage backup problem that cost Lewis dearly. Like his predecessors, Lewis would reroute backed up sewage into a storm drain, as he had been instructed to do, believing that it flowed into a municipal sewage treatment facility.

Unbeknownst to Lewis, however, the drain runs into a creek that flows into the Potomac River. The Clean Water Act makes any negligent discharge of sewage without a permit into the waters of the United States—which includes the creek and the Potomac River—a federal crime.

Lewis never intended to commit a crime—in fact, he thought what he was doing what was entirely proper—but he nevertheless felt compelled to plead guilty to a misdemeanor offense as part of a plea bargain to avoid a felony conviction and possible jail sentence.

When someone on a bus chartered by the Democratic National Committee to campaign for Clinton also dumped sewage into a storm drain, a committee spokesperson said that it “was an honest mistake and we apologize … We were unaware of any possible violations.”

So far, it appears that no one from the Democratic National Committee faced the same consequences that Lewis faced.

In 2014, the two moderate states of Ohio and Michigan both enacted mens rea reform in order to address this breakdown in the rule of law. In the last Congress, Rep. James Sensenbrenner Jr., R-Wis., and Sen. Orrin G. Hatch, R-Utah, introduced mens rea reform bills.

The current Congress should continue their work to enact a much-needed default mens rea provision that puts the rule of law above politics.

In his dissent in the seminal case of United States v. Dotterweich (1943), decided by a 5-4 vote, Supreme Court Justice Frank Murphy wrote that “a blind resort to ‘the good sense of prosecutors’” to define crime without a clear mens rea standard “is precisely what our constitutional system sought to avoid. Reliance on the legislature to defin[e] crimes,” Murphy continued, is what “distinguishes our form of jurisprudence from certain less desirable ones.”

Murphy warned that the “legislative power to restrain the liberty and to imperil the good reputation of citizens must not rest upon the variable attitudes and opinions of those charged with the duties of interpreting and enforcing the mandates of the law.”

Obama’s disdain for mens rea reform reveals his preference for the “less desirable” legal system that Murphy warned against, which allows him to more efficiently achieve his “progressive goals” without the meaningful protection against injustice that mens rea provides.

Contrary to Obama’s view, mens rea reform would improve the criminal justice system for everyone.