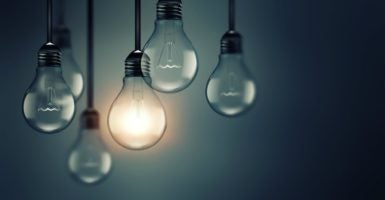 James Edwards is a consultant on intellectual property and health policy, and advises Eagle Forum on patent issues. The views expressed here are his own.

On the path to making America great again, President-elect Donald Trump will have a tremendous opportunity to reverse the steady slide away from a property rights-oriented American patent system.

There are good reasons to believe a Trump administration will readily grasp this critical problem and work to revitalize the American patent regime.

First, someone like Trump who has succeeded so well on the world’s biggest stages in real estate development will readily understand the fundamental need for sound, secure, enforceable property rights. After all, you face huge risks and problems developing real estate if you haven’t first secured the rights to that property.

The same holds true for developing and commercializing an invention if you don’t first gain the rights to its intellectual property. It would be foolish to start down the path of commercializing a new wireless telecommunications technology, a cutting-edge implantable medical device, or a new biopharmaceutical therapy without first securing the proper patent rights.

While making corporations like Carrier and Ford Motor Co. curb their outsourcing strategies may do some good, it isn’t sufficient.

Revitalizing our system of patent property rights will incentivize massive private investment into the discovery, research, and development stages of innovation. These risky stages may take years to lead to commercialization, but they are essential for clearing the way for new inventions.

Only confidence in an enforceable right to your own inventions translates into the kinds of research and development that result in new manufacturing plants, good-paying jobs, and continued innovation.

Likewise, to strengthen national security, we must ensure that we create and produce in America the components and parts to our military and national security material and sensitive equipment.

Allowing China and other foreign countries the easy opportunity to steal American intellectual property or to install malware into computers that run our energy grids or warplanes, for instance, creates tremendous national security and cybersecurity vulnerabilities. Trump gets this.

Similarly, the Trump administration could stand up for U.S. intellectual property rights abroad by threatening real consequences when foreign governments deny U.S. businesses due process, use questionable antitrust claims to devalue or to appropriate their intellectual property, or otherwise advantage their own domestic companies and harm American firms.

Third, Donald Trump Jr. has experienced the anti-intellectual property behavior of the anti-patent side. MacroSolve, a mobile technology firm that the president-elect’s son was involved with, found its patents being infringed by incumbent companies.

When the small company tried to defend its patents, the big companies invoked the “patent troll” smear and kept right on infringing—economically benefiting from the unauthorized use of the stolen technology in the marketplace while refusing to pay to license MacroSolve’s patents.

The younger Trump explained the problem in a 2012 op-ed in The Daily Caller:

Not every company that brings suit for software patent infringement is an exploiter. Some are genuine tech innovators with a real historical and financial investment in their ideas. To conflate these two situations, as many opponents of software patent litigation do routinely, unfairly maligns companies that deserve to reap the fruits of their labor.

The same can be said for legitimate inventors in garages, university labs, and corporate research and development people who are inventing the next immunotherapy, semiconductor, advanced material, or robotic device. Just as Trump Jr. learned, all these creators deserve the exclusive right to their inventions.

Certainly, Vice President-elect Mike Pence grasps the economic importance of Indiana’s inventive life sciences sector and other manufacturing. He values Indiana’s academic assets of invention and tech transfer such as Purdue University. Explaining the importance of the Bayh-Dole Act and the Hatch-Waxman Act—two landmark patent laws from recent decades—should resonate with Pence.

Unlike antitrust leadership in the Obama administration, Wright has opposed using antitrust laws to devalue patents out of fear of an unproven theory known as patent holdup, which says the patent system threatens the rate of innovation in the U.S. economy. This theory lacks empirical evidence, and it should not hold sway in the Trump administration.