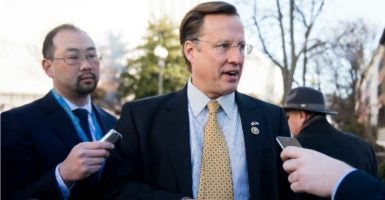 Rep. Dave Brat, R-Va., has introduced a bill in the House that, if passed, will allow individuals to decide how they want their health care funds to be spent, without the influence of the government or health insurance providers.

Brat said that the health savings account legislation is a way for lawmakers to prove to the American people that they have a plan to replace Obamacare after repealing it.

“First and foremost, we are putting through one of the biggest public policy initiatives of the decade with an Obamacare repeal,” Brat told The Daily Signal in a phone interview. “And so that has become very important to people, what you are going to replace it with. People want assurances that they are going to be better off.”

Labeled the Health Savings Account Expansion Act, or H.R. 247, “this bill equalizes the tax treatment for health insurance and care between different ways of paying for it,” according to a statement from Brat.

Mia Heck, the director of the health and human services task force at the American Legislative Exchange Council, or ALEC, told The Daily Signal that health savings accounts help individuals plan for their future.

“A health savings account (HSA) is a pre-tax medical savings account available for taxpayers who are enrolled in a high-deductible health plan,” Heck said in a statement provided to The Daily Signal. “The high-deductible health plan serves as catastrophic coverage, while encouraging individuals and families to save money to use toward future medical expenses. Funds deposited into an HSA are not subject to federal income tax.”

According to Brat, health insurance accounts enable consumers to shop around for plans that best suit their needs.

“Instead of having to get coverage approved from the government, an employer, or an insurance company, people will be able to use their [health savings account] funds directly for the products and services that they value,” Brat said.

Sen. Jeff Flake, R-Ariz., has reintroduced a companion bill in the Senate.

Flake said that the Health Savings Account Expansion Act puts individuals in charge of their health care decisions without penalty from the government or their insurance provider.

“[Health savings accounts] give consumers greater control over their health care dollars by providing them with a tax-advantaged savings option for their medical expenses,” Flake said in a speech Wednesday on the Senate floor. “This means that the dollars they work so hard to save can grow over time, tax-free, and be withdrawn, tax-free, for qualified medical expenses.

First, it enlarges contribution limits to $9,000 to $18,000 per year for people who file single or jointly.

Second, it removes restrictions imposed by Obamacare for items that are purchased over the counter.

Third, it permits users to allocate health savings account funds to pay their health insurance premiums and other health care costs, such as doctor visits.

This legislation, according to Brat, is a free-market solution to the health care crisis.

“People are going to be very rational when it comes to allocating your own dollars that the doctor or whatever service you are going for,” Brat told The Daily Signal.

Brat sees his proposed legislation as a way to plan for the future and address the problems Obamacare has created.

“The reason Obamacare policy is so important is because it is right in the middle of Social Security and the Medicare crisis,” Brat said. “Both of those programs are insolvent in 12 years. And the kids won’t get any of those programs if we don’t do something about this.”

His presidential campaign website stated that they would be of “great benefit” to individuals.