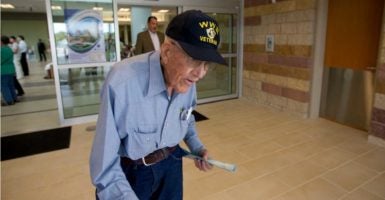 A number of well-publicized fiascoes have opened up potential for a reform of the Department of Veterans Affairs. (Photo: Bob Daemmrich /Polaris/Newscom)

President-elect Donald Trump promised to fire incompetent and dishonest Department of Veterans Affairs employees, but he will have to fight the American Federation of Government Employees—the largest federal worker union—every step of the way.

During the 115th Congress, Trump—along with Republican majorities in both the Senate and House of Representatives—can enact sweeping reforms to improve every department and agency in the federal workplace.

“Donald Trump wants to throw veterans to the wolves. Private health care for veterans would be an expensive disaster, and no one should be fooled into believing otherwise,” said AFGE National President J. David Cox Sr.

As a first order of business, Trump will appoint a new secretary of veterans affairs who will negotiate the “master agreement” between the department and the 360,000 workers there, mainly represented by AFGE.

The new VA secretary hasn’t been selected yet, but experience in dealing with unions might be most relevant in selecting somebody capable of changing the department’s abysmal culture.

Having a stiff spine will also be important. Cox once said he would “whoop [current Secretary Bob McDonald’s] ass” if he didn’t give workers more money. But additional changes involve constitutional, contractual, and legal issues.

Wisconsin Gov. Scott Walker, who rolled back public union influence in his state, has proposals that could possibly be implemented at the federal level, as FedSmith recently noted.

Among possibilities for reform:

In general, there are reforms that enable the government to work more like a private sector startup instead of a 1980s post office or DMV. Most reforms heavily overlap with measures for reducing union influence.

With baby boomers retiring, these changes could make the federal government a place where talented young people want to work, not an employer of last resort.

Moderates will also increasingly oppose AFGE if the union is forced to take a public stand on legislation dealing with bad VA employees. The union refused to explain its position on a seemingly straightforward bill introduced by Sen. Jeff Flake for the same reason.

The Arizona Republican’s proposal requires that the VA should not hire convicted kidnappers or sex predators. The union often lobbies behind the scenes in Congress to water down bills by contributing to and working with Democrats.

One important person who could be a valuable resource for Trump’s civil service reform efforts is former Rep. Jeff Miller, the Florida Republican who was chairman of the House Committee on Veterans Affairs from 2011 to 2016.

Miller was an aggressive and effective advocate for measures intended to make it easier to fire poorly performing VA employees. It remains to be seen if Miller’s successor as chairman, Rep. Phil Roe of Tennessee, will be as tough as Miller.

And while Miller was initially floated for the position of VA secretary, recent speculation focuses on others who have health care or military experience, but not union or federal personnel expertise.

On the Senate side, Senate Committee on Veterans Affairs’ Chairman Johnny Isakson, a Georgia Republican, often deferred to the panel’s ranking Democrat, Sen. Richard Blumenthal, saying if he did not, Obama would simply veto the legislation.

Isakson spokesman Amanda Maddox refused to say whether the committee would be more aggressive in approving VA reforms now that a veto threat from the White House is far less likely.

This article has been updated to correctly identify Scott Walker as the current governor of Wisconsin.