The Obamacare Executive Orders Trump Could Issue on Day One 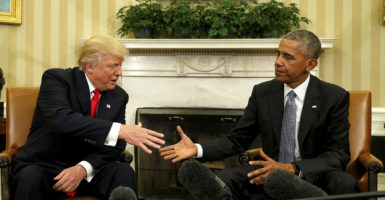 During a meeting with Republicans on Capitol Hill Wednesday, Vice President-elect Mike Pence said the president-elect plans to kick off his administration by signing executive orders to begin dismantling Obamacare.

“We’re working now on a series of executive orders that will enable that orderly transition to take place even as Congress appropriately debates alternatives to and replacements for Obamacare,” Pence told reporters after the meeting.

Pence did not elaborate on which parts of the law the president-elect would dismantle using his executive authority, and Trump’s transition team did not return The Daily Signal’s request for comment.

But health care experts believe there are several steps the president-elect can take on his first day in the White House that would deliver a blow to the health care law even before Congress acts legislatively.

“This is the problem with expansion of executive branch powers is that it cuts both ways,” Seth Chandler, a visiting scholar at George Mason University’s Mercatus Center and a professor at the University of Houston Law Center, told The Daily Signal. “I think a lot of liberals gave Obama a pass when he did it, and they’re now potentially going to have to face the consequences of permitting the executive to greatly expand its powers.”

Experts believe Trump could first decide not to enforce the individual mandate, which requires people to have health insurance and fines those who do not.

The provision was designed to balance out the population of consumers who enrolled in coverage under Obamacare and ensure healthier enrollees offset the higher costs associated with a sicker enrollment population.

But if the president-elect decided not to enforce the individual mandate, it “could make a real difference to the vitality of the exchanges going forward,” Nicholas Bagley, a professor at the University of Michigan Law School, told Kaiser Health News.

The president-elect also could announce his intention to seek hardship exemptions for all enrollees, effectively exempting everyone from the individual mandate, Chandler said.

“Obama expanded the hardship exemption for all sorts of reasons,” he said. “He has paved the way to a larger set of exemptions.”

The individual mandate is also likely to be the target of congressional Republicans in a reconciliation bill repealing parts of Obamacare.

Cost-sharing reductions are discounts offered to eligible consumers who purchase silver-level plans. The federal government then reimburses insurers for the reductions.

Last year, a federal judge ruled in favor of House Republicans, but the Obama administration filed an appeal to a higher court.

Dropping the appeal would allow U.S. District Court Judge Rosemary Collyer’s ruling to stand, and the payments to insurers would end.

If the payments ended, insurers would still be offering discounts to customers, but would no longer receive subsidies from the federal government to help with the cost.

“[Rep.] Tom Price voted to authorize a lawsuit to stop those payments because Congress never authorized them,” Chandler said of Trump’s pick for Health and Human Services secretary. “It becomes a little difficult for having said the payments are illegal to continue to keep making them.”

In addition to the cost-sharing reductions, insurance companies received money from another program, the reinsurance program, under the Affordable Care Act.

Under the program, payments are made to insurers who enroll higher-risk populations.

But $5 billion was supposed to be returned to the Treasury before it was distributed to insurers. The Obama administration, however, has prioritized at least $3.5 billion to insurers over the Treasury.

Now, Republicans in Congress are pushing the Department of Health and Human Services to return the money paid to insurers under the reinsurance program to the Treasury.

Chandler said Trump could issue an executive order instructing the government to repay the Treasury.

Under the Affordable Care Act, states had the option to create a Basic Health Program, which was designed to offer public health insurance to low-income residents who did not qualify for Medicaid but were below 200 percent of the federal poverty line—$48,600 for a family of four in 2016.

Like the cost-sharing reductions, Trump could decide to no longer allocate money the states receive for Basic Health Programs, which would “throw the market in those two states in disarray,” Chandler said.