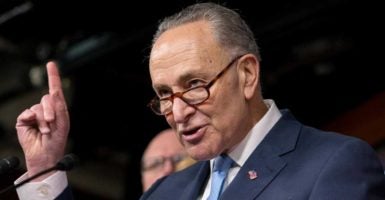 “The consequences are going to be down the road,” Schumer said. “We are not going to settle on a Supreme Court nominee. If they don’t appoint someone who is really good, we are going to oppose them tooth and nail.”

During an interview with MSNBC’s Rachel Maddow, Maddow asked Schumer if he agreed with a statement from Sen. Jeff Merkley, D-Ore., about how Republicans have refused to confirm President Barack Obama’s Supreme Court nominee, Merrick Garland.

“It is a fair statement,” Schumer said.

Maddow said she believes that, should Republicans fill the late Justice Antonin Scalia’s vacant seat, that seat would be “stolen.”

Garland is the chief judge of the U.S. Court of Appeals for the D.C. Circuit who was nominated by Obama to replace Scalia, who died in February.

Schumer added that his party is “not going to make it easy for them to pick a Supreme Court justice.”

John Malcolm, the director of the Edwin Meese III Center for Legal and Judicial Studies at The Heritage Foundation, said that he is not surprised at the opposition raised by the new Senate minority leader.

“It is hardly surprising that Sen. Schumer has indicated that he will fight to block whoever President-elect Trump nominates to the court to replace Justice Scalia,” Malcolm said in a statement provided to The Daily Signal.

Schumer said at a September conference it was his “No. 1 goal” to get a progressive Supreme Court, according to Malcolm.

“The voters, however, rejected this vision of where the court ought to go,” Malcolm said.