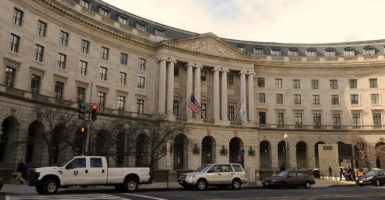 The REINS Act will require congressional approval and the president’s signature for all major rules issued by federal agencies. (Photo: Roger L. Wollenberg/UPI/Newscom)

Doug Collins is a former U.S. representative from Georgia's 9th Congressional District. He served on the House Judiciary and Rules committees, and was vice chairman of the House Republican Conference.

As a new Congress begins, Republicans have made it clear that regulatory reform is a priority that puts the interest of all Americans first, especially concerning the economy.

It’s been said that sometimes government rules “have gotten out of balance, placing unreasonable burdens on business—burdens that have stifled innovation and have had a chilling effect on growth and jobs.”

It is in fact President Barack Obama who made that statement in 2011 in his appeal “to strike the right balance” in executive rulemaking.

In an outstanding contradiction to the spirit of these words, the current administration brought our regulatory burden to a bloated $1.88 trillion in 2015—meaning that on average, each U.S. household is bearing an annual economic weight of $15,000. This underscores the reality that unchecked regulations hit business and family finances without distinction.

That’s where the REINS Act comes in.

Federal agencies currently have the power to make “major rules”—ones that have an economic impact of $100 million or more—without the oversight of Congress or the signature of the president. The REINS Act would put in place meaningful checks on agency overreach by requiring congressional approval and the president’s signature for major rules.

Absent these checks, we fall victim to oppressive regulations like the Department of Labor’s overtime rule, which hurts the very people it is trying to help and imposes unworkable burdens on businesses, universities, and employees.

In 2015, the Department of Labor raised the salary threshold under which people are eligible for overtime from $23,660 to $47,476. While the rule seems like it would provide more overtime pay to more people, the economic effect is that it smothers job creators.

With their administrative resources consumed by tracking more information with less flexibility, it turns out that businesses have to cut jobs as a result of the overtime rule. Even if businesses raise salaries above new overtime levels to avoid additional administrative costs, they are still left with less money to pay salaries overall—which means they can support fewer jobs.

As a tool for checking executive overreach, the Congressional Review Act is begging for improvement, which the REINS Act offers by amending the original legislation.

If the overtime rule had been subject to a vote by Congress before it was enacted, as the REINS Act would require, American workers could have been spared the consequences of the heavy-handed and poorly-crafted regulation. Yet support for the REINS Act is not merely practical—it is also constitutional.

Article 1 of the Constitution assigns the responsibility of lawmaking to a House and Senate made up of elected officials, and it does so in order to ensure that the people who are affected by federal laws and regulations have a say in how those rules are made.

Without the balance that the REINS Act offers, Americans and their economy remain subject to the decisions and missteps of unelected bureaucrats, who seem agonizingly unable to “strike the right balance” between helpful and harmful rules.

Executive agency overreach is, at heart, a constitutional issue, and one that the REINS Act remedies in a way that reformers in both parties should be able to support. If made law, this legislation would require agencies to submit their major regulations for congressional approval before they could go into effect, and both chambers would be required to accept or reject the rule within 70 legislative days.

The president’s signature would also be required for any of Congress’ joint resolutions on a major rule to take effect. Agency regulations with economic impacts of under $100 million would remain unaffected by the REINS Act.

The bill is not retroactive, so Republicans haven’t devised it as a way to blot out the actions of a previous administration and the agencies it oversaw. It’s also not unwieldy from a legislative perspective, adding only 50-100 votes to the congressional calendar each year.

What we’ve done is to craft a way to move forward with legislative business and restore accountability to the legislative process while better protecting our economy from suffocating regulations that Americans never voted to enact.

The current president has said balance in federal regulations is necessary, and President-elect Donald Trump has said the REINS Act will help guarantee that balance, promising that he would sign this “major step toward getting our government under control” were the bill to reach his desk.

The REINS Act brings transparency, accountability, and constitutional balance to the branches of government regardless of which party controls those branches, and it returns power to the electorate by making sure that their votes have a voice in major federal rulemaking.