Cruz, Lee, Rubio Call on Senate Leaders to Repeal ‘as Many Provisions of Obamacare as Possible’ 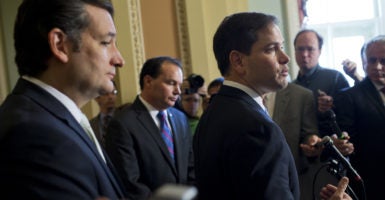 Republican Sens. Ted Cruz of Texas, Mike Lee of Utah, and Marco Rubio of Florida are reaffirming their support for repealing Obamacare using reconciliation this year, but are calling on Senate leaders to craft a bill that goes further than previous legislation passed in 2015.

“The American people have given Republicans an historic opportunity to repeal Obamacare,” the trio of Republicans wrote in a letter sent Tuesday. “They have delivered majorities to both chambers of Congress and elected a Republican president who has promised to make this a priority from day one.”

Under reconciliation, legislation needs just 51 votes to pass, and the GOP controls 52 seats in the 115th Congress.

Cruz, Lee, and Rubio said they expect the repeal bill to do away with, at a minimum, the components of Obamacare repealed through a reconciliation bill crafted in 2015.

The bill, which President Barack Obama vetoed, also stripped the government of its authority to run the federal and state-run exchanges. It further decreased the fine for failing to comply with the employer and individual mandates to $0, a provision needed to comply with Senate rules.

In addition to eliminating the provisions included in the 2015 reconciliation bill, Cruz, Lee, and Rubio called on Senate GOP leaders to repeal insurance mandates, if they are determined to be eligible for inclusion in reconciliation bill.

These mandates include the essential health benefits requirement and the ban on limiting or denying coverage to consumers with pre-existing conditions.

The insurance mandates, the senators wrote, are “driving up health insurance costs for millions of Americans.”

However, some members are skeptical as to whether those provisions, in particular, would pass muster with the Senate parliamentarian, who has the authority to strike out parts of a reconciliation bill.

If the reconciliation bill crafted in the coming weeks repeals less of Obamacare than what was passed by Congress in 2015—which the trio of senators said sets the floor for this year’s legislation—then Senate leaders risk losing the support of Cruz, Lee, and Rubio.

GOP leaders began putting into motion a plan to repeal and replace Obamacare after Donald Trump won the White House in November. Republicans also maintained control of the House and the Senate.

Their proposal involves passing two budget resolutions—one for 2017 and one for 2018—which would allow them to use reconciliation twice.

Enzi released the text of the 2017 budget resolution Tuesday, and it instructed the four congressional committees with jurisdiction over Obamacare to begin crafting the reconciliation bill to repeal it.

McConnell said the GOP plans to use the second reconciliation bill to reform the tax code.

But in their letter to the majority leader, majority whip, and Budget Committee chairman, Cruz, Lee, and Rubio called on Senate leaders to pass a 2018 budget resolution that “sets out new, unified Republican federal government on a path to balance in 10 years without the use of budgetary gimmicks or tax increases.”

This story was updated to clarify repeal of Obamacare’s insurance mandates.