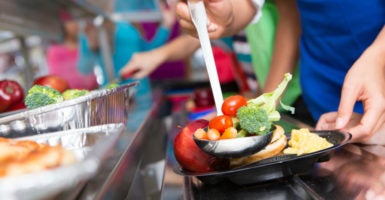 Last year, both the House and Senate introduced bills to reauthorize child nutrition programs, but reauthorization ultimately stalled by the end of 2016. This is good news though, because both bills would have simply doubled down on heavy-handed policies put into place by the Healthy, Hunger-Free Kids Act of 2010.

Congress should now take the opportunity to create child nutrition policy that rolls back the big-government policies currently in place, even if it means doing so before a reauthorization bill is considered.

Congress can and should work to undo three particularly problematic provisions from the 2010 law: prohibitive government school meal standards, the community eligibility provision (which expanded free meals for students), and the Summer Electronic Benefit Transfer program (a de facto expansion of the food stamps program).

For example, children under this law are required to take fruits and vegetables, even if they don’t want them, and schools are told what types and colors of vegetables they must serve, as well as the type and amount of milk they are allowed to provide to students. The result has been public outcry, more waste in school cafeterias, and increased costs for schools.

Policymakers should end this federal overreach into school cafeterias by rolling back these heavy-handed standards and allowing school districts to develop their own standards. This would allow local officials to tailor school meals to the needs of their communities and better respond to the demands of parents and students.

The community eligibility provision, also part of the Healthy, Hunger-Free Kids Act, tries to expand welfare to middle-class and wealthy families. It inappropriately expands free meals to all students regardless of family income. Essentially, it’s a backdoor approach to universal school meals.

No longer does a child need to be low-income to receive free meals. Under this provision, if 40 percent of students in a school, group of schools, or school district are identified as eligible for free meals because they receive benefits from another means-tested welfare program like food stamps, then all students can receive free meals.

Moreover, by being able to group wealthy schools with high-poverty schools when calculating the threshold for eligibility, some schools could provide free meals to all students even if there’s s not a single child in that school who is low-income.

Congress should stop allowing a means-tested welfare program to be distorted so much that the federal government no longer has to assess the “means” of families. It should eliminate the community eligibility provision and bring common sense back to school meal programs.

Only low-income students should be able to receive free or reduced-price lunches, as was the case before this indefensible provision was added to the law. Doing so would restore integrity to school meal programs by ensuring that this welfare program serves those in need instead of simply transferring taxpayer money to those who don’t need assistance.

The Summer Electronic Benefit Transfer program is a pilot program that provides low-income families with funds via a debit card to pay for food during the summer months when children are out of school.

Proponents claim that this program is necessary to ensure that children are fed when they are on summer vacation. The House and Senate child nutrition bills would have either continued this pilot program or made it permanent.

The Summer Electronic Benefit Transfer program is, in essence, a de facto expansion of the food stamps program rather than a child nutrition program—both provide households a debit card in order to purchase food, allowing both children and adults to receive the benefits.

Policymakers should end this program rather than permanently adding it to the long list of federal food assistance programs.

Serious child nutrition reauthorization would address these deeply flawed policies. Congress should steer away from the failed policies of the Healthy, Hunger-Free Kids Act and toward policies that respect parents and local leaders, avoid extending the welfare state to middle-class and wealthy families, and do not add to the already massive means-tested welfare system.