She Got the Car the Government Seized Back. But Her Fight Isn’t Over 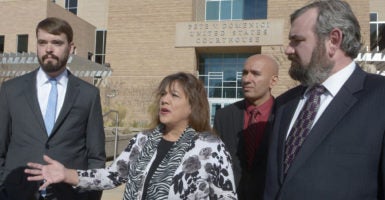 Arlene Harjo, center, successfully fought the city of Albuquerque's April 2016 seizure of her car in court. Her car was ultimately returned, but Harjo, along with her lawyers Robert Johnson, left, and Robert Frommer, right, of the Institute for Justice, are continuing their challenge of Albuquerque's vehicle forfeiture program. (Photo: Greg Sorber /Zuma Press/Newscom)

An Albuquerque, New Mexico, woman whose car was seized last year by New Mexico police received her vehicle back from the city last month after challenging the seizure in court.

But Arlene Harjo plans to continue fighting the city of Albuquerque in court over the legality of a controversial program that allowed law enforcement to seize her car in the first place.

Under Albuquerque’s vehicle forfeiture program, which Harjo is challenging in court, the city seized over 8,000 vehicles and more than $8 million worth of property from 2010 to 2015.

Harjo’s son, Tino, was driving the car when police pulled him over and subsequently seized the vehicle.

According to court filings, the city admitted that the New Mexico State Police officer who initiated the seizure did so outside of Albuquerque city limits. The officer had initially testified during an administrative hearing that the seizure occurred within the city’s jurisdiction, but a videotape proved otherwise.

Citing its lack of jurisdiction, the city urged the court to dismiss Harjo’s challenge to Albuquerque’s vehicle forfeiture program, which the 54-year-old and lawyers with the Institute for Justice, a public interest law firm based in Arlington, Virgina, believe is illegal. City officials were ultimately unsuccessful in getting the court to reject the case.

In response to the city’s move to return Harjo’s vehicle, Harjo’s lawyers criticized the city for returning the car in an attempt to protect its multimillion-dollar vehicle forfeiture program.

“We’re thrilled that Arlene is getting her car back. But this lawsuit has always been about more than a single car,” Rob Johnson, a lawyer with the Institute for Justice who is representing Harjo, said last month. “Albuquerque’s illegal program takes thousands of cars every year. The city cannot make this case go away just by copping to the lesser charge of taking property outside its jurisdiction.”

“The city cannot make this case go away just by copping to the lesser charge of taking property outside its jurisdiction,” said Rob Johnson of the Institute for Justice.

Police seized Harjo’s car in April after Tino was arrested for drunk driving.

Harjo initially gave her son permission to drive the 2014 Nissan Versa to go to the gym, but she later learned her son had driven the vehicle to visit his girlfriend in Clovis, New Mexico.

It wasn’t until Harjo received a phone call from her son that she became aware he had been arrested for drunk driving and was in jail.

Police towed Harjo’s Nissan Versa, and she received a letter from the city of Albuquerque two days later notifying her that officials were seizing it using civil asset forfeiture.

Harjo, meanwhile, was never charged with a crime, and continued to make payments on the vehicle while it was in the city’s possession.

The city of Albuquerque initially offered to return the car back to Harjo if she agreed to pay $4,000 to the city and have a boot on her vehicle for 18 months. Harjo ultimately refused the deal and opted instead to fight the pending forfeiture in court.

Under civil forfeiture laws, law enforcement can seize cash, cars, and property if they suspect it’s tied to a crime.

In 2015, the New Mexico Legislature passed legislation reforming the state’s civil forfeiture laws. Now, law enforcement must secure a conviction before the government can forfeit property.

Despite these changes to the laws, law enforcement in Albuquerque have continued to seize property through the vehicle forfeiture program.

As outlined in a city ordinance, the vehicle forfeiture program allows Albuquerque officials to take a car driven by someone arrested on suspicion of driving under the influence if they’ve been charged with drunk driving before or if they were caught driving with a suspended license because of a prior drunk driving charge.

In Harjo’s case, Tino had been convicted of drunk driving in 1998 and 2001. Police previously arrested Tino for driving under the influence in 2009, but he was never convicted.

Harjo and her lawyers with the Institute for Justice argued Albuquerque’s vehicle forfeiture program violated state laws and urged the city to return the car.

Albuquerque’s vehicle forfeiture program has proven to be a boon for the city.

In 2014, the city seized more than 1,200 cars, which resulted in more than $1.2 million in forfeiture proceeds for the city, the Albuquerque Police Department said in a report from that year.

Over a five-year span, the city seized 8,369 vehicles under the vehicle forfeiture program and collected more than $8.3 million, the Albuquerque Journal reported.

“Financial gain lies at the heart of Albuquerque’s civil forfeiture program,” Robert Frommer, an Institute for Justice lawyer also representing Harjo, said. “Nobody asked if the seizure was legal when the city stood to benefit. Nobody asked before demanding that Arlene pay $4,000. But now that the entire million-dollar program is on the line, of course they ask.”

But, the court said the lawmakers didn’t have standing.

After the city seized Harjo’s Nissan Versa in April 2016, she decided to challenge not only the seizure of the car, but also the legality of Albuquerque’s vehicle forfeiture program.

“I want to make sure no innocent person has to go through this again,” Harjo said last month. “The city took my car for no reason, and now they say the whole thing was a big mistake. That makes it worse, not better. Obviously, I’m thrilled to get my car back, but that doesn’t make the last eight months go away.”