I’m a Lifelong Democrat. Here Are 3 Reasons I Pulled the Lever for Trump. 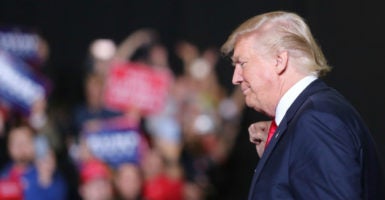 Donald Trump greets supporters as he approaches the stage during a campaign rally in Toledo, Ohio. (Photo: Emily Molli/ZUMA Press/Newscom) 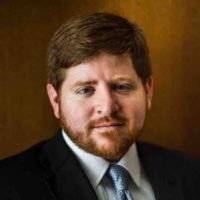 Michael Reeb is a Pittsburgh area native, an Air Force combat veteran, and a D.C. information technology consultant for a Fortune 25 company.

Asking with a terseness normally associated with changing religions or declaring a new nationality, many people that know me have politely cornered me and demanded: “How could you—a lifelong, left-leaning, Obama-believing, Indy-Dem voter—vote for Donald Trump?”

My answer to them is simple: Our nation is in the middle of a crisis. We are stuck at the crossroad of hometown humiliation, job fabrication, and cultural mutation. Here’s what I mean by that.

My reasons for going Trump this election cycle weren’t a surprise to my hometown friends in Rust Belt Butler, Pennsylvania, home of the world’s first Jeep.

In Butler, we’ve seen the destruction of our middle class, the loss of our factories, and the pollution of our clean water (Butler is now also home to the nation’s second most polluted waterway, the Connoquenessing). At the same time, we’ve had record-high heroin use and juvenile jailing rates, and the population has shrunk nearly every year since the 1970s.

Butler is my hometown, and Butler is in trouble. My hometown friends and I understand this plain as day, but the nation hasn’t been listening to the decades-old problem of hometown humiliation.

Trump proved to be different, and unpredictably so. Fate would have it that the very last person I would have predicted to show love for the common man would be one of the world’s richest men. A businessman who seems to have been hurt the least by our nation’s outsourcing has become a champion of the working class.

While Hillary Clinton was hiding from press conferences and startling the world with her hard-left policy dash to catch her opponent Sen. Bernie Sanders, Trump was out visiting Pittsburgh.

While he was out building bridges with working America on any given day, Clinton could be found ducking reporters, recovering from her husband’s latest gaffe about Black Lives Matter. This was but one of many “blunder-then-bunker” examples that came to define the Clinton campaign.

Did Trump blunder? Daily! But his ultimate atonement was that he showed love for the American people and is a patriot. It’s a lot easier to forgive a blundering candidate hugging the American flag in a room full of blue-collar Americans, than one hiding in the back of a 737 dodging press questions.

The trust between small-town America and her political representatives had been broken. As with all great relationships in turmoil, Trump knew he needed to put in quality time and a true love for the small-town cause in order to kick-start the healing process between Rust-Belt America and the national leadership.

Trump unapologetically did just that. His candidacy was the beginning of the healing process for humiliated hometown America, which had been desperate to find a champion.

Statistically, Trump was up against a hard economic game. On paper, President Barack Obama has created jobs every month for years and broken many “records” numerically. There’s just one problem—jobs are not just numbers.

In the wake of the promised tidal wave of more and more jobs, somehow fewer jobs appeared. Not fewer in number, necessarily, but in quality.

Butler lost its factories when I was living there in my teens, and they never returned. Some of my most vivid family memories regarding work consist of suffering the humiliation of my uncle being flown to Mexico to train his factory “replacement,” with the threat of no severance pay if he objected.

When you take a man’s craft away from him, no numeric of fast food, retail, or administrative work positions can ever replace that feeling of seeing something of value that you created move down the line and into America’s homes. As we’ve heard it said a thousand times: “Not everything valuable is numeric, and not everything numeric is valuable.”

Our economy had sold us out, and not just in terms of income or the American dream. The corporate and elite classes of America took the craft away from the men and women who built the Jeeps of Butler County that beat Hitler in World War II. Their new “jobs” weren’t jobs at all; we were the victims of job fabrication.

When Trump descended from his golden tower in New York City, I expected a much different presidential announcement. Maybe something witty about how the other side doesn’t understand “real” economics, or perhaps a Ronald Reagan quote from a “gotcha” debate moment.

I was prepared for another in a long line of Republican gaffes about women’s anatomical health, another canned attempt at communicating political ideology, or at the very least something reminiscent of the dehydrated Florida politician that I had on YouTube repeat not so long ago.

In place of that, I was shocked to find a Trump openly criticizing the economic policies that have led to America’s economic decline. He spoke of jobs being lost to China and Mexico, and asked one of the most biting economic questions I’ve ever heard in my life: “When was the last time you saw a Chevy car in Tokyo?”

Somehow, up in a multimillion-dollar New York tower overlooking what seemed like the whole world, Trump heard that our jobs had been fabricated—and he sounded like the only one who had heard.

I don’t know a soul back home who would stand 100 percent behind every single comment Trump has made—but I know many that still trust him despite his gaffes.

We’ve all had that mean-spirited co-worker or boss who had the sole saving grace of being amazingly skilled at their job. That is Trump. You may hate him for his thin skin and explosive “tweet-punches,” but I knew that from the vantage point of my hometown, considering the other candidates, we had no other choice.

With no other boxer to bet on in America’s most dislikable election, and as a last-ditch message of desperation to the political establishment that had sold us out for years, we simply had to believe that Trump could rise to the occasion for us.

Hypocrisy was as rank as always in this political cycle, but the sources of it were most surprising. Some in the media criticized Trump’s tendency to rate women numerically. This is quite easy to criticize, until we ask ourselves why over 7 million Americans watch women rated numerically every year in our very own swimsuit-laden Miss America pageants.

Should we really be outraged at one and OK with the other?

Ironically, it was not priests and holy men that were castigating Trump’s comments, but a hypocritical media that had done or reported on the exact same things they accused Trump of doing.

Rust Belt America had already been bruised from the last self-righteous political campaign victory in 2012, which played it neutral on moral issues, but ended up trying to legislate men into children’s bathrooms by 2016.

Hometown Americans understood this hypocrisy and, unlike the “tender” millennial generation, didn’t seem to mind a little rough talk. Upon reflection, the American people knew that they had said worse things, or viewed worse things, felt worse things, and even heard the same things from other political leaders (think President Richard Nixon).

The final straw for hometown Americans was Clinton herself—shiftlessly avoiding any hard commitment to a policy, and attempting to mount a cultural attack against a man who is enormously versed in pop culture.

Criticizing Trump’s use of celebrities turned out to be a catastrophic and costly move for Clinton. Her accusations of sexism against Trump followed by her complete, open-armed endorsement of Miley Cyrus and the hardly-PC Jay-Z revealed her selective moralism.

Those paying attention saw that Clinton’s posture of indignation was simply that: a posture.

In the end, my once go-to party had morphed into a party of unrecognizably veiled actors, much like the Hypokrinesthai—ancient actors wearing masks, from whom we derive the English word “hypocrite.” But whereas those once-famous masked actors would play one character, only to pull back the mask to reveal the real hero underneath, this Democratic “hero” was much different.

The Democratic Party did not yield a heroic protagonist this election cycle, but a cultural mutation, constantly in flux and fearful of definition. To many lifelong Democratic voters, Clinton was morally unrecognizable. In political terms, she was the epitome of lukewarm—which, if anything, meant she would not stand up for hometown America.

Given all these factors, many like myself from small-town, Rust Belt America could no longer afford to take the establishment’s candidate by faith. Trump saw the true state of our hometowns, our fake jobs, and the hypocritical elite, and was willing to break every political norm in the book to address these critical issues.

So we voted for Trump. And he won—big league.