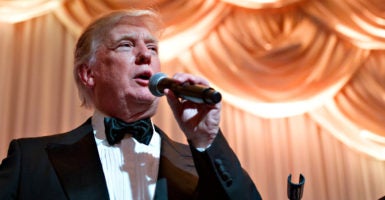 In January 2009, the Senate confirmed 10 of Obama’s Cabinet choices within his first week as president, nine of them by voice vote, in which senators’ yes and no votes aren’t recorded.

Now, though, the Senate’s top Democrat has put the chamber’s top Republican on notice that at least eight of Trump’s picks are in Democrats’ crosshairs, beginning with one of their own colleagues—Trump’s choice for attorney general, Sen. Jeff Sessions, R-Ala.

Others targeted are Trump’s picks for secretary of state, treasury, education, labor, and health and human services.

“Any attempt by Republicans to have a series of rushed, truncated hearings before Inauguration Day and before the Congress and public have adequate information on all of them is something Democrats will vehemently resist,” new Senate Minority Leader Chuck Schumer, D-N.Y., said Monday in a statement to The Washington Post.

“If Republicans think they can quickly jam through a whole slate of nominees without a fair hearing process, they’re sorely mistaken.”

In addition to Sessions, The Washington Post reported, those targeted by Democrats include Rex Tillerson, the Exxon Mobil CEO who is Trump’s choice for secretary of state, and Steve Mnuchin, the former Goldman Sachs executive who is Trump’s pick for treasury secretary.

Other Trump choices on the hit list, Democratic aides told the newspaper:

Senate Majority Leader Mitch McConnell, R-Ky., answered the Democrats on Tuesday by releasing statistics and quotations he said illustrate how much deference Republicans gave to Obama’s nominees in 2009—and how much Schumer and other Democrats have said they respected such deference.

Why Democrats Have Few Options

Democrats don’t have the numbers to outright defeat Trump nominees, thanks to a procedural change they made when they last controlled the Senate.

Republicans need a simple majority of 51 votes to move to confirm the president’s Cabinet appointments, rather than the supermajority of 60 previously required, and they have 52 seats. In addition, incoming Vice President Mike Pence will have the power to break any tie votes.

Democrats’ requirement of only a simple majority to avoid a filibuster and put a confirmation to a floor vote, or advance other business, is known on Capitol Hill as “the nuclear option.”

“They have tied their own hands on this,” Heritage Foundation procedural expert Rachel Bovard said of the Democrats, “and because of ‘going nuclear,’ essentially they have put every … nominee at a 51-vote threshold and there’s 52 Republicans.”

Referring to Republican leadership and the Trump transition team, Bovard added in a phone interview with The Daily Signal:

So, if they can get every Republican on board for each nominee, which I think that they’ll be able to do, there’s not much that Senate Democrats can do against that. It’s completely their own fault.

Sixty votes still are required to end debate and proceed to a vote to confirm a nominee for the Supreme Court, though a simple majority is required to confirm.

Democrats controlled the Senate in 2009, and would for two years, but Republicans put up little or no resistance to the choices of a new Democrat president, Obama, for top executive branch offices.

Now that Republicans control the Senate, however, Democrats appear to be showing little such deference to a new Republican president’s picks to run major government departments.

Bovard, director of policy services at The Heritage Foundation, previously was policy director for the Senate Steering Committee and an aide to several Republican senators and House members.

She told The Daily Signal that Obama’s Cabinet nominees enjoyed an easy confirmation process because of the well-established tradition of senatorial respect for a president’s major appointees, who run executive branch departments as the president expects.

Bovard said of the traditional attitude of senators:

They may not agree with everything that the nominee says or does or pledges, but it has been a longstanding tradition particularly in the Senate just to say, ‘Look, the president has the right to pick his own people.’ That is sort of the underlying trend.

Interestingly, the Senate used the voice vote more in confirming Obama’s initial Cabinet choices than it did in conforming Bush or Clinton nominees.

“I think we owe deference to a president for choices to executive positions, and I think that that is a very important thing to grapple with,” Kaine said at a 2013 hearing held by the Armed Services Committee.

In November, the release from McConnell’s office reminded, Schumer suggested he would work with Republicans to get things done in Congress and avoid needless delays.

“We have a moral obligation, even beyond the economy and politics, to avoid gridlock and get the country to work again,” Schumer told Bloomberg. “We have to get things done.”

Senate Democrats can do little to derail Trump’s nominees, Bovard said, but they can use various procedural maneuvers to delay the process. Among them: failing to show up to a committee meeting so that a quorum is not present, and, on the Senate floor, prolonging debate for up to 30 additional hours.

‘Confident in the Nominees’

Conservatives in Congress appear eager to work with the department heads and other executive branch officials Trump has assembled, Bovard said.

“I think for the most part conservatives feel confident in the nominees that have been put forward. I think they are trying to give Trump’s Cabinet a chance,” she said. “They have not come out swinging in any direction except forward.”

This positive attitude is largely due to the stalwart conservative convictions of Trump’s picks, Bovard said, citing three:

Questioning his honesty, the Democratic National Committee demanded on New Year’s Eve that Sessions recuse himself from the Senate vote to confirm him as attorney general. A hearing for Sessions before the Judiciary Committee is scheduled for Jan. 10, which is 10 days before Trump is sworn in as president.

The Democratic National Committee accused the Alabama senator of withholding information in filling out the screening questionnaire issued by the Senate Judiciary Committee. In a statement, Adam Hodge, DNC communications director, said:

Jeff Sessions has fiercely argued in the past that omitting information isn’t just wrong, that it may also be illegal. So what does he do once he’s nominated to be the attorney general? He omits information from his dark past, particularly when he was deemed too racist to be a federal judge.

Based on his own reasoning, and in keeping with Senate tradition, Sessions must recuse himself from voting on his own nomination.

Sarah Isgur Flores, a spokeswoman for Sessions in the confirmation process, says such attacks are unfounded.

He has bipartisan endorsements that include law enforcement, victim rights organizations, and African-American leaders because they understand he will refocus the Department of Justice on upholding the rule of law and ensuring public safety. The time for playing politics should have ended on Election Day.

A Question of ‘Previous Political Activity’

Grassley, in response, said Sessions has been upfront about his past, including old accusations, and that he submitted more material to supplement his answers. The committee chairman added that hearings would not be postponed.

Among her concerns, Feinstein said, is that Sessions, an early supporter of Trump for president, was not clear enough in explaining his involvement in “any political campaign.”

Grassley replied in a letter to Feinstein: “The question regarding previous political activity is of course designed to ascertain whether and how a nominee has been politically active. There can be no surprise that a sitting United States senator is politically active.”

Feinstein said another concern is that Sessions has not submitted the text of some speeches.

“Regarding the claim that several speeches were not included, of course you also know that we and our colleagues are frequently called upon to speak at a variety of constituent and other events,” Grassley replied. “Senator Sessions explained that he made his best effort to identify and locate copies of such remarks where available.”

The committee chairman added that Sessions produced all items requested in the questionnaire.

Grassley noted that past Cabinet nominees have not been able to provide transcripts for every speech they ever gave. And, he said, Obama’s first attorney general, Eric Holder,  “supplemented his questionnaire materials several times.”