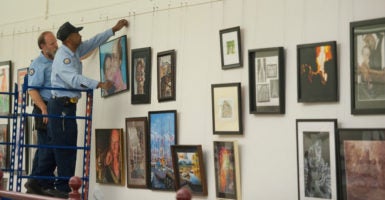 There currently hangs in the United States Capitol building a painting that depicts police officers as anthropomorphic pigs.

Yes, you read that correctly. The painting actually depicts police officers as gun-wielding pigs. And yes, it is hanging in the halls of the U.S. Capitol.

The Capitol building contains, among the obvious two houses of Congress, multiple historically significant works of art, statues of our nation’s greatest heroes, innovators, and civic leaders, and is capped by a rotunda graced by Constantino Brumidi’s famed fresco “The Apotheosis of Washington.”

And alongside all of this beauty now hangs a divisive and insulting painting ostensibly meant to highlight social injustice. How could such a humiliating work of “art” make its way into such a prestigious place?

No, Colin Kaepernick did not sneak into the Capitol and hang the painting while no one was looking. Its placement in the Capitol can actually be credited to Rep. William Lacy Clay, D-Mo.

Clay selected the artwork, named “Untitled #1,” as his district’s winner in the 32nd Annual Congressional Art Competition. As such, “Untitled #1” now proudly hangs in the Capitol alongside other winners of the competition.

Its unseemly content has not gone unnoticed. Rep. Dave Reichert, R-Wash., a former police officer, told the Independent Journal Review, “Unfortunately, many people of influence have taken part in promoting offensive and inaccurate caricatures of the very people who do the most to protect our families.”

He added, “While I understand in some neighborhoods trust between police and communities has all but deteriorated, we must work on rebuilding these relationships and focus on our shared goals of peace and civility.”

Clay, however, seems to have no qualms about the divisive nature of “Untitled #1.” He described the work as “the most creative expression that I’ve witnessed over the last 16 years” and added that it “portrays a colorful landscape of symbolic characters representing social injustice.”

Apparently, depicting police officers as pigs—an image long understood to be derogatory and insulting to the entire law enforcement profession—is justifiable since they are merely “symbolic characters representing social injustice.”

It’s a shame that Clay, like so many others, seemingly has no issue with broadly disparaging an entire profession of men and women, from all backgrounds and walks of life, who literally risk their lives on a daily basis to provide safe and secure communities.

Although they would never say so—surely out of pride and the honor with which they uphold their profession—but the men and women of the United States Capitol Police, working merely yards from this piece of art, must be disheartened at how some in society, and apparently at least one member of Congress, holds them in such disregard.

The young artist who created “Untitled #1” no doubt meant for his work to be provocative and thought-provoking. In that regard, he was certainly successful, but for the wrong reasons.

Rather than elicit a thoughtful response on community strife and social injustice, “Untitled #1” divides and separates observers. If your desire is to help a community heal and overcome division, then purposely and unnecessarily playing to people’s prejudices is not the way to go.

Artwork in any form is certainly subjective, but “Untitled #1” is objectively insulting and has no place hanging within the halls of the United States Capitol. Lawmakers should demonstrate their respect for law enforcement by having this image promptly removed.