The Mystery of Wealth Inequality, Explained 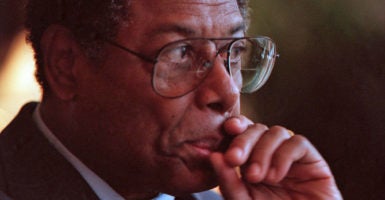 Thomas Sowell has just published a revised and enlarged edition of his classic “Wealth, Poverty and Politics.” At the very beginning, he quotes Alexander Hamilton, who said, “The wealth of nations depends upon an infinite variety of causes.”

The book’s 16 chapters apply Hamilton’s notion to domestic, as well as international, differences in wealth. In both academic and popular literature, it is implicitly assumed that economic equality is natural, automatic, and common. Thus, people see wealth inequality as a mystery that must be explained.

The fact of the matter is precisely the opposite.

The ancient Greeks had geometry, philosophy, architecture, and literature at a time when Britain was a land of illiterate tribal people living at a primitive level. Of course, by the end of the 19th century, Britain was far ahead of the Greeks and ultimately controlled one-quarter of the planet’s land.

Such historic reversals have occurred elsewhere. The ancient Chinese were far ahead of Europeans, but by the 19th century, the relative positions of the Chinese and Europeans were reversed. Just these two examples prove that the same people are not always on top.

Sowell argues there are many factors that explain wealth differences among nations, as well as people within those nations. One of the more obvious explanations is that some people have greater productive capacity than others. Or they seized more of what others produced or had what they produced taken from them.

For example, Spain conquered indigenous people in the Western Hemisphere. Spaniards looted 200 tons of gold and 18,000 tons of silver. But despite that wealth transfer, Spain is one of the poorer countries in Western Europe today, surpassed economically by countries—such as Switzerland and Norway—that never had an empire, so there obviously are many factors at play when it comes to wealth differences.

Sowell discusses the impact of a number of these factors. One is geography. Hardly anyone considers its impact on achievement and wealth.

For example, because of soil differences, crop yields per acre in Africa are a tiny fraction of what they are in China and the U.S. The absence of navigable waterways and mountain ranges has isolated people and created differences in their skill sets.

Cultural factors, such as education, have an important impact on wealth, too. Natural resources are of little consequence in explaining wealth differences. Even physical capital is of little or no use without the cultural prerequisites to maintain it, repair it, and replace it.

Evidence for this lies in the fact that the physical wealth of Germany was destroyed in World War II but in just a few years it was again a wealthy nation.

Some people attribute Germany’s resurgence to the Marshall Plan. But that’s not right, because massive foreign aid has been provided to Third World countries and has yet to produce the economic results Germany has had. The human capital in Germany, developed over centuries, has not existed on the same scale in Third World countries.

In later chapters, Sowell discusses the impact of political institutions and the welfare state on inequality. One of the more important contributions of “Wealth, Poverty and Politics” is Sowell’s discussion of earnings differences.

We’ve all heard statements such as “the income gap between the richest and the poorest members of our society has been growing rapidly.” Studies of actual people over time suggest just the opposite.

A University of Michigan study traced people over a 15-year period and found that 95 percent of those in the lowest quintile at the beginning of the study were in a higher quintile by the end. Remarkably, 29 percent had moved to the top quintile.

An IRS study of tax filers between 1996 and 2005 found similar results. Sowell says that over time, there are different people in different income categories.

These few snippets here in no way do full justice to Sowell’s work. To get all the nuts and bolts, you’ll just have to purchase a copy of “Wealth, Poverty and Politics.”