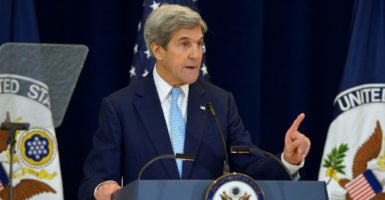 Secretary of State John Kerry gave a 70-minute speech that focused largely on Israeli settlements as an obstacle to peace while paying less attention to the role of Palestinian incitement. (Photo: State Department/ZUMA Press/Newscom)

Kerry claimed that the decision to permit the passage of the one-sided resolution was aimed at “preserving the two-state solution” to the Israeli-Palestinian conflict, which “is now in serious jeopardy.”

The 70-minute long lamentation amounted to a passionate defense of his own failed diplomatic efforts to renew Israeli-Palestinian negotiations.

Kerry proposed six principles that should guide future negotiations, including secure borders for both Israeli and a Palestinian state, a “fair and realistic” solution to the question of Palestinian refugees, and designating Jerusalem as an “internationally recognized capital of the two states.”

Billed as a “comprehensive vision” of Arab-Israeli peace, Kerry’s speech boiled down to a jeremiad against Israeli settlers, whose “agenda is defining the future in Israel.”

Kerry assumed a high-minded moralistic tone that was detached from reality. He focused obsessively on settlements as impediments to peace while glossing over the harmful role played by Palestinian terrorism, the continuing incitement of the Palestinian Authority, and the failure of Palestinians to abide by their commitments under the Oslo peace accords.

Kerry’s tunnel vision regarding the settlements, and his paying only lip service to Israeli security needs, were major reasons for the failure of his diplomatic efforts to jump-start the long-stalled peace talks.

Kerry failed to mention that when Israel did freeze settlement expansion for 10 months during the Obama administration’s first term, no progress was made on peace negotiations because the Palestinians ruled out any concessions.

Moreover, settlements can be dismantled if necessary to reach a peace agreement.

As long as Hamas retains a stranglehold on Gaza, there is no realistic chance for a stable Israeli-Palestinian peace. Yet rather than focus on defeating Hamas militants who reject peace negotiations and even Israel’s right to exist, the Obama administration has chosen to chastise Israel at the U.N.

Kerry’s speech comes during a historic low point in U.S.-Israeli bilateral relations. Israeli Prime Minister Benjamin Netanyahu has accused the U.S. of colluding with the Palestinians by allowing last week’s resolution to be adopted by the U.N. Security Council.

Kerry denied that “somehow the United States was the driving force behind this resolution.”

Israel is concerned that the Security Council resolution is a harbinger of more anti-Israeli actions at the United Nations, which has a long history of siding against Israel.

France plans to host an international conference attended by 70 countries next month to endorse an international framework for Mideast peace. Israeli officials worry that the conference’s recommendations may then be enshrined in another U.N. Security Council resolution before Obama leaves office on Jan. 20.

At a time when Russia and Iran are slaughtering thousands of civilians in Syria and ISIS continues to inflict carnage, it is unseemly that the Obama administration has gone out of its way to censure, isolate, and undermine Israel, a longtime ally.

Kerry’s speech is one more reminder that the Obama administration, even in its waning days, remains much more concerned about engaging adversaries than it is about alienating allies.

Its self-righteous tendency to lecture and berate friends while accommodating adversaries, such as Iran and Cuba, is a major reason that its foreign policy has been such a disaster.