What Rick Perry Could Do to Prevent Future Solyndras 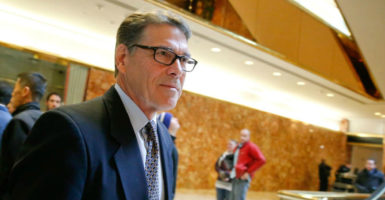 Gov. Rick Perry, R-Texas, has been nominated as the next energy secretary by President-elect Donald Trump. (Photo: Brendan McDermid/Reuters /Newscom)

Departing Secretary of Energy Ernest Moniz has announced a conditional loan guarantee for a fossil fuel project—a blatant, taxpayer-backed subsidy of up to $2 billion for Lake Charles Methanol, LLC.

Such federal government meddling in the energy sector is the exact wrong approach to America’s energy policy. By contrast, incoming Energy Secretary Rick Perry has called for the abolition of the Department of Energy. A good place to start would be the abolition of the loan guarantee program.

The risk involved is likely a factor increasing their financing costs. Too much risk is often a reason why projects do not receive financial backing. Or, companies may have better options for their investment dollars.

There’s a long list of reasons why projects do or don’t receive investment funding, but it’s not a legitimate function of government to fill the void for projects that do not.

The Department of Energy’s loan program is a double-edged sword for the American economy. Either the government subsidizes likely-to-fail projects, thus throwing away taxpayer dollars, or they provide corporate welfare, keeping politically favored activities alive while diminishing the innovative role of the entrepreneur and private investment. It’s a lose-lose proposition.

In the first case, the federal government has lent out taxpayer dollars to projects that could not survive even with policies trying to prop up favored technologies.

Solyndra is the poster child for the government’s failure as an investment banker, but the loan program has several other black eyes with other currently struggling companies.

In the second case, the Department of Energy has awarded money to very profitable, well-established companies. In fact, some of the more successful projects in the agency’s loan portfolio have backing from some of the largest companies and financiers in the world.

Neither these nor any other companies should be allowed to hedge their bets on the backs of taxpayers. If they’re willing to risk some of their own money, they should pony up the full amount if they truly believe the technology is promising and worth the risk.

In almost every instance, the company receiving the loan guarantee also stands to benefit from the plethora of federal, state, and local subsidies at their disposal. Their current and long-term success depends on more subsidies. Whether the company ultimately succeeds financially or goes belly up, the policy itself is a loser.

At the bottom of the heap are American entrepreneurs competing against the gargantuan federal government for investment. Because capital is in limited supply, a dollar loaned to a government-backed project will not be available for another project.

This means that the higher-risk, higher-reward companies that drive innovation and bring new services and technologies into the marketplace may not get support, while companies with strong political connections or those that produce something that politicians find appealing will get support.

During his eight-year tenure in office, President Barack Obama railed against fossil fuel subsidies, some of which weren’t even subsidies but broadly available tax credits.

In discussing the elimination of oil subsidies in his 2012 State of the Union speech, Obama said, “It’s time to end the taxpayer giveaways to an industry that’s rarely been more profitable.”

But now he’s risking taxpayer dollars for a fossil fuel project as he walks out the door.

The next administration should do as Obama said, not as he did—the federal government shouldn’t be dolling out taxpayer giveaways to the fossil fuel industry, or any energy technology for that matter.

We have a robust energy market that efficiently supplies Americans with their energy needs. If we want to drain the swamp, Congress and the next administration need to drain the Department of Energy’s investment bank account.