Standing Up to Political Bullying Is What Voters Want 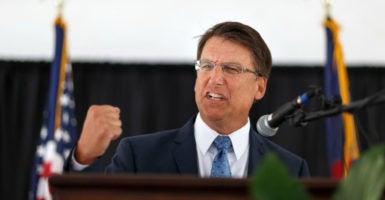 After a month of counting absentee and provisional ballots, exploring voter fraud, and recounting 90,000+ ballots in one of the progressive strongholds of the state that were turned in at 11:30 p.m. on election night, North Carolina Governor Pat McCrory conceded that he lost his re-election on Dec. 5.

McCrory lost his re-election by only 10,277 out of 4.7 million votes, or two-tenths of 1 percent. However, repeal of the H.B. 2 “bathroom bill” is not the lesson to be learned from the election.

The governor’s race in North Carolina had barely concluded before the Human Rights Campaign and other LGBT groups began taking credit for having unseated the one-term governor over his refusal to back down to their bullying.

The Human Rights Campaign engaged in an eight-month smear campaign against the state of North Carolina—with McCrory as the primary target—over the passage of North Carolina’s privacy law, which blocked a Charlotte city ordinance that would have allowed men into women’s bathrooms, showers, locker rooms, and other intimate facilities.

The Human Rights Campaign points to highly suspect internal polling as proof that this issue was his downfall, but the facts bear out a different conclusion. McCrory’s strong stance for privacy and safety and ensuring that local laws do not impose financial and legal liability on businesses actually helped him in his re-election bid, rather than hurting him.

So how does a governor who has presided over a massive economic comeback lose his re-election bid?

The most compelling evidence that the privacy law was not a deciding factor in the governor’s race is the fact that Lt. Gov. Dan Forest (who had championed the law) and the Republican majorities in the General Assembly (who crafted and passed the law) ended up winning re-election overwhelmingly.

Forest won 51.8 percent to 45.3 percent, a higher winning margin than President-elect Donald Trump, Sen. Richard Burr, or the Democrats who won the governor and attorney general races received. In fact, Forest brought in more total votes than either Trump or Gov.-elect Roy Cooper.

State Rep. Dan Bishop, who championed the privacy law in the House, was elected to the Senate by almost 14 percentage points. If H.B. 2 were really a factor, it would have been a factor in these races as well as the governor’s race.

The truth is that voters in North Carolina were enthusiastic about re-electing those who preserved dignity, privacy, and safety by standing strong even in the face of bullying and extortion from the media, Fortune 500 companies, the NBA, and the NCAA.

The most measurable reason for McCrory’s downfall can be attributed to his refusal to scrap a toll road as the means for expansion of an interstate highway used heavily by commuters north of Charlotte.

The dispute arose over three years ago and peaked a year before the election, when four Republican state lawmakers called for the governor to kill the I-77 toll lanes and start over.

A Republican grassroots group threatened not to vote for McCrory in his re-election bid unless he scrapped the toll construction—and sure enough, those voters made good on their promise. Planned Parenthood was even caught red-handed posing as an anti-I-77 toll group.

A post-election comparison of votes from this highly Republican part of the state reveals that McCrory received 33,775 fewer votes in 2016 in these areas of the state than he did in 2012—enough to cost him the election.

To add further support to this argument, Republican State Rep. John Bradford lives in the middle of this I-77 toll corridor, and he won his re-election race handily (56.5 percent to 43.5 percent), despite the fact that his opponent ran solely on her opposition to H.B. 2. Bradford won by a larger margin in 2016 than he did in 2012, another indicator that H.B. 2 was not what influenced his race or the governor’s race.

Social conservatives were not enthusiastic about McCrory before H.B. 2 because of his veto of a previous religious liberty bill, his opposition to passing a Religious Freedom Restoration Act, and his threatened veto of a pro-life bill. McCrory himself admitted that he is not known for his support for social issues.

Only in the summer of this year did McCrory earn higher marks in the polls than his opponent, Cooper. It was then that the Republican base began to realize McCrory was standing strong on restroom and locker room privacy and safety, indicating that his handling of H.B. 2 and his determination not to give in to bullying, threats, and misrepresentations on the issue actually helped him gain ground with voters.

In addition, his handling of relief efforts for the destruction caused by Hurricane Matthew gave him a bump in public opinion polls right before the election.

Even the left-leaning group Public Policy Polling admits that McCrory’s approval right before the election (and post-H.B. 2) was the highest it’s been in over three years: “We’d found Pat McCrory with a negative approval rating every single month since July 2013 until now—45 percent of voters give him good marks to 43 percent who disapprove.”

The logical conclusion is that the negative trend for McCrory started long before North Carolina ever passed its privacy law, and his surprisingly strong stand in favor of H.B. 2 helped him gain enough support to run almost even with Cooper on Election Day.

But rising public opinion alone was not enough to help McCrory win, especially when he was being outspent by his opponent by almost $8 million.

Cooper raised $21.6 million to McCrory’s $13.75 million. That type of disparity between the candidates’ campaign budgets was destined to put McCrory at a disadvantage.

Republican insiders said that McCrory had not built his fundraising base outside of Charlotte, and that he was ill-prepared as a result. When money drives elections, not having it is critical.

The most damaging assault on McCrory’s re-election bid came from the “Blueprint for North Carolina” effort led by progressive groups to retake the state. They crafted a plan that directed their members to “eviscerate, mitigate, litigate, cogitate, and agitate,” and politically wound the state’s leadership, well before H.B. 2 became an issue.

One thing is for sure: Any claims that McCrory lost re-election because of North Carolina’s privacy law must be taken with a big grain of salt. The truth is that all politics is local, and McCrory’s refusal to act on conservative priorities such as the I-77 toll road and a larger progressive plan to target and take down the governor are to blame.

If anything, H.B. 2 helped the governor shore up the millions of North Carolinians who were skeptical about his commitment to religious freedom and conservative causes.

Although he narrowly lost the closest governor’s race in recent history, McCrory was right to stand on principle and not give in to the left’s bullying and attacks.

He may be leaving office, but North Carolina’s families and businesses will benefit from his bold stand for dignity, privacy, and safety, as well as his economic reforms, for years to come.