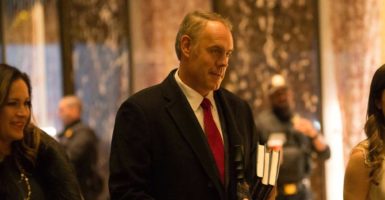 Rep. Ryan Zinke, R-Mont., has been selected to be the secretary of the interior. (Photo: Polaris /Newscom)

President-elect Donald Trump announced Thursday he has selected Rep. Ryan Zinke, R-Mont., a former Navy SEAL who broke with the Republican platform over federal lands, to be the next interior secretary.

“As a former Navy SEAL, [Zinke] has incredible leadership skills and an attitude of doing whatever it takes to win,” Trump said in a statement, adding:

America is the most beautiful country in the world and he is going to help keep it that way with smart management of our federal lands. At the same time, my administration’s goal is to repeal bad regulations and use our natural resources to create jobs and wealth for the American people, and Ryan will explore every possibility for how we can safely and responsibly do that.

The Interior Department manages federal lands and Native American tribal policies. This would include drilling and mining on federal lands, expected to be key parts of a Trump administration energy policy.

“I will work tirelessly to ensure our public lands are managed and preserved in a way that benefits everyone for generations to come,” Zinke said in a statement. “Most important, our sovereign Indian nations and territories must have the respect and freedom they deserve. I look forward to making the Department of Interior and America great again.”

Zinke is a fairly new figure in national politics. Montana voters elected him to an at-large House seat during the Republican wave of 2014.

“As a former Navy SEAL, he has incredible leadership skills,” @RealDonaldTrump says.

“As someone who grew up in a logging and rail town and hiking in Glacier National Park, I am honored and humbled to be asked to serve Montana and America as secretary of interior,” Zinke said. “As inscribed in the stone archway of Yellowstone National Park in Gardiner, Montana, I shall faithfully uphold Teddy Roosevelt’s belief that our treasured public lands are ‘for the benefit and enjoyment of the people.’”

Here are a few things to know about the possible next interior secretary:

Zinke spent 23 years as a Navy SEAL, and though it’s a different experience than running a federal department, he ran several large organizations during this time.

He graduated officer candidate school and attended SEAL training class in 1985 before being assigned to SEAL Team One in Coronado, California. The Navy later selected him for SEAL Team Six, where he was a team leader, a ground force commander, a task force commander, and a operations officer.

During the second Iraq war, Zinke was the deputy and acting commander of the Combined Joint Special Operations Task Force-Arabian Peninsula, in command of more than 3,500 special operations personnel.

He served as a special operations officer in Europe and was the SEAL commander of Joint Task Force Two for missions in Bosnia-Herzegovina, Croatia, and Kosovo.

The Navy’s final assignment for Zinke was to establish a Naval Special Warfare Advanced Training Command with a staff of 250 educators providing 43 college-level courses to 2,500 students each year at 15 different locations. He retired in 2008.

After retiring from the Navy SEALs, he ran for the Montana state Senate in 2008 and won. In the state Legislature, he was chairman of the Senate Education and Cultural Resources Committee and served on the Senate Finance and Claims Committee.

In 2012, Montana Republican gubernatorial candidate Neil Livingstone selected Zinke as his running mate to serve as lieutenant governor. In his first statewide race, the Livingstone/Zinke team lost in a crowded Republican primary.

Two years later, Zinke rebounded to get elected to the U.S. House of Representatives, the same year that Republicans recaptured the Senate and increased their House majority.

He was an advocate for the Land and Water Conservation Fund, and has supported allowing hunters access to public lands. He introduced the Resilient Federal Forest Act in Congress that helped initiate reform for timber areas and preventing wildfires.

“After hanging up the uniform, he decided to continue his service by representing the people of Montana in the House,” Ryan said in a statement. “As a member of the Natural Resources Committee, he has been an ardent supporter of all-of-the-above energy policies and responsible land management. And as a Westerner with close to one-third of his state owned by the federal government, he is intimately familiar with how Washington’s decisions affect people’s lives.

The GOP platform drafted before the Republican National Convention in July included a plank to transfer federal lands to states, which Zinke strongly disagreed with.

Zinke was so opposed to this idea of transferring federal lands to the state that he resigned as a convention delegate.

“What I saw was a platform that was more divisive than uniting,” Zinke told the Billings Gazette at the time. “At this point, I think it’s better to show leadership.”

Congress shall immediately pass universal legislation providing a timely and orderly mechanism requiring the federal government to convey certain federally controlled public lands to the states. We call upon all national and state leaders and representatives to exert their utmost power of influence to urge the transfer of those lands identified.

Zinke told the newspaper he doesn’t want to sell the lands, but wants better management.

Zinke’s record on conservation issues prompted the Theodore Roosevelt Conservation Partnership, a conservationist nonprofit, to express optimism in a statement from the group’s president, Whit Fosburgh.

“Zinke is someone we can work with,” Fosburgh said. “He’s shown the courage to buck his own party on the issue of selling or transferring public lands that provide 72 percent of Western sportsmen with access to great hunting and fishing. He’s a lifelong outdoorsman, who we’ve found to be receptive to sportsmen’s interests in Montana and [the District of Columbia]. We won’t agree with him on everything, but we think he’s someone who will listen and has the right instincts.”

Zinke had interesting comments on both of the 2016 major party presidential nominees.

When running for Congress in 2014, he reportedly referred to eventual Democratic presidential nominee Hillary Clinton as the “Antichrist” and the “real enemy.”

Though he was a Trump supporter, Zinke scolded the Republican nominee after the hot mic moment from “Access Hollywood,” when Trump made lewd remarks about women.

Zinke reportedly said: “What Mr. Trump said was wrong. There is no other way to say it. He should be ashamed. But, that doesn’t make Hillary any better a candidate.”

Zinke didn’t withdraw his endorsement of Trump after the incident as some Republicans did.