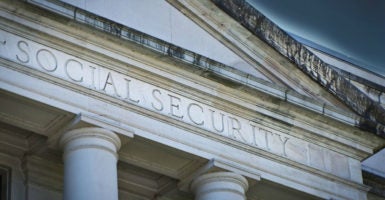 Finally, a reform plan has been introduced to preserve Social Security without troubling younger generations with undue debt and tax burdens.

This plan, the Social Security Reform Act of 2016, was introduced last week by Rep. Sam Johnson, R-Texas, the chair of the House Ways and Means Subcommittee on Social Security.

Johnson’s plan applies the right policy principles to achieve sustainable Social Security solvency, ensuring that the program can pay full benefits as scheduled over the 75-year projection, and beyond.

While the proposal is missing key provisions to expand private retirement savings and reduce the overall size and scope of the Social Security program, it moves in the right direction.

Johnson’s plan demonstrates that no tax increase is necessary to achieve Social Security solvency. In fact, the plan would cut taxes by eliminating federal taxation of Social Security benefits.

The plan also eliminates the retirement earnings test, which has acted as a tax for beneficiaries working part-time. Some retirees may increase their labor force participation in response, which would be good for the economy and their financial security.

Better Targeting of Benefits to Improve Adequacy and Reward Work

Social Security’s benefit formula is already progressive. Johnson’s plan would enhance those features, focusing benefits on American workers with lower incomes, while reducing benefits for upper-income earners who are better able to provide for their own retirement needs through savings and investment.

The plan does this by 1) adjusting the benefit formula that calculates initial benefits based on lifetime earnings, 2) limiting cost-of-living adjustments to all but the highest-income earners, and 3) capping survivor and dependent benefits to the average wage index to reduce injustices in the current system.

Gradual Increases in the Retirement Age

A major factor driving Social Security spending higher is that people are living longer, healthier lives. Without adjusting the retirement age, this means that more people are drawing Social Security benefits for longer. Men and women today at age 65 live on average six and seven years longer, respectively, than they did in 1940.

Johnson’s proposal would gradually raise the full retirement age to 69, while keeping the early retirement age the same. Those able to work even longer could accrue higher benefits for waiting until 72 years of age to collect benefits.

Raising the age is a long overdue change. The age should further be indexed for changes in life expectancy—something that’s missing from the proposal.

The proposal makes several other adjustments, including expanding access to disabled surviving spouse beneficiaries and implementing a fairer method to calculate benefits for state and local workers subject to the windfall elimination provision under the current system.

The proposal’s biggest shortfall is that it preserves the size and scope of the current Social Security program and merely tweaks it. A bolder proposal would consider allowing individuals to opt out of a portion of their payroll taxes (and benefits) in favor of private accounts that they own and control outside of Social Security.

Younger individuals are particularly interested in such change. The majority of Americans less than 35 years of age support Social Security opt-outs.

Recognizing the $20 trillion national debt rests on their shoulders, they are seriously questioning the federal government’s role in benefit provisions that go beyond protecting individuals from catastrophic, unforeseen events. More tools and strategies are available today than ever before to help individuals plan for their own retirement needs.

By eliminating both Social Security payroll taxes and Social Security trust funds, the government could focus retirement and disability benefits on those who need them, at far less cost to taxpayers than today’s trillion-dollar program.

Another shortfall is that the proposal fails to include reforms to the disability program. There are several reforms that would improve the integrity and efficiency of the broken disability insurance, including proposals in the Social Security Disability Insurance Return to Work Act, introduced by Sen. Tom Cotton, R-Ark., and Sen. Mike Lee, R-Utah, last August.