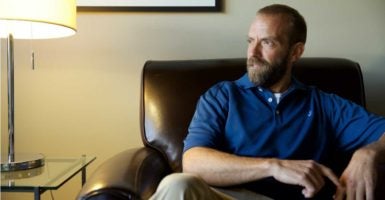 Blaine Adamson, a print shop owner in Kentucky, still has battles in court over an incident where he was accused of discrimination against an LGBT group after not printing T-shirts. (Photo: ADF/Brianna Herlihy)

A lawyer representing a Kentucky print shop owner who chose not to print gay pride festival T-shirts argued in a hearing this week that the government cannot force a person to create speech against his or her beliefs.

Blaine Adamson, owner of Hands On Originals in Lexington, Kentucky, turned down business due to his religious beliefs in 2012. He chose not to print shirts for the Gay and Lesbian Services Organization in advance of a gay pride festival.

The LGBT organization filed a discrimination complaint against Adamson with a local human rights commission.

“This case is about the expressive freedom of everyone, because if the owners of Hands On Originals must print messages that conflict with their beliefs, then there’s nothing stopping the government from forcing a lesbian printer to create a religious group’s flyer objecting to same-sex marriage or forcing a Muslim graphic designer to build a website promoting Jewish beliefs,” Jim Campbell, senior counsel at Alliance Defending Freedom, told The Daily Signal. “I think that there is a universal appeal to what we are arguing here.”

A Kentucky circuit court sided with Adamson in April 2015, saying that he had the right not to print the shirts. The Lexington-Fayette Urban County Human Rights Commission had previously ruled that Adamson must print T-shirts, even if the messages on the shirts conflicted with his religious beliefs.

The commission appealed to the Kentucky Court of Appeals on the Fayette County Circuit Court ruling that overturned the commission’s decision. The oral argument was held Dec. 13.

“Protecting Blaine’s freedom protects everyone’s freedom, regardless of their beliefs or convictions,” Campbell said in a statement. “No matter what you believe, the government shouldn’t be able to force you to create speech that conflicts with your deepest convictions.”

Adamson’s lawyers say they believe he has the right to decline printing shirts that conflict with his deeply held values.

“The trial court’s decision rightly affirmed that, and we are asking the court of appeals to do the same,” Campbell stated.

Campbell told a three-judge panel Tuesday that Adamson does not discriminate based on a person’s sexual orientation, the Lexington Herald-Leader reported.

“Hands On Originals declined to print the shirts in question because of the messages on them, not the sexual orientation of the individuals who asked for them,” Campbell told the Kentucky Court of Appeals, according to the local news outlet.

According to the Lexington Herald-Leader, Ed Dove, a lawyer with the Lexington Human Rights Commission, said, “You can’t separate the message from the discrimination. That’s a red herring.”

Blaine explained that he could not print a shirt bearing a message that conflicts with his faith. He then offered to connect the [Gay and Lesbian Services Organization] to another printer who would create the shirts for the same price that he would have charged.

The owners of Hands On Originals object to printing anything that promotes sexual activity or relationships outside of a marriage between a man and a woman. That belief regularly requires them to decline orders from heterosexuals.

Alliance Defending Freedom says it expects a court decision to be made within 90 days.