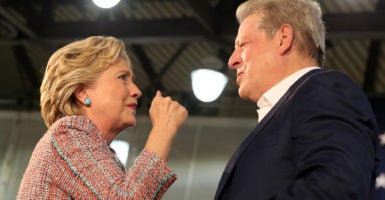 Left-wing environmental groups are publicly melting down over the nomination of Oklahoma Attorney General Scott Pruitt to serve as the next administrator of the U.S. Environmental Protection Agency. Some are even calling on the U.S. Senate to block his confirmation.

None of this outrage is sincere, of course, but it still provides a valuable lesson: Environmental groups have learned almost nothing from the 2016 election and remain completely out of touch with blue-collar voters.

Pruitt, a Republican, is a staunch critic of the Obama administration’s climate and energy policies and a key player in legal efforts to overturn them. But even some environmentalists are cringing over the reaction to his nomination.

Before the Dec. 7 announcement, when Pruitt was one of two finalists, veteran environmental advocate Frank O’Donnell predicted what would happen.

“If either of these folks get picked, they will be vilified relentlessly as the personification of evil, of a person who hates children with asthma and loves oil derricks and coal mines,” O’Donnell told E&E News. “Whether that’s a fair characterization or not, I think that’s how they’ll be portrayed,” O’Donnell said.

Sure enough, the environmental left proved O’Donnell right. Pruitt’s nomination to lead the EPA was like “putting an arsonist in charge of fighting fires” because he “regularly conspired with the fossil fuel industry to attack EPA protections,” the Sierra Club claimed.

The Natural Resources Defense Council mounted a similar attack against the Oklahoma attorney general, claiming he belongs in the “environmental hall of shame.” A former adviser to President Barack Obama even called Pruitt “an existential threat to the planet.”

So, according to the environmental left, Pruitt cannot lead the EPA because he opposes the policies of the current administration and works too closely with interested groups. That’s a curious argument, to say the least, because you could have said the same things about Obama’s first EPA administrator, Lisa Jackson, when she was nominated eight years ago.

“The Sierra Club has had a very close, very positive relationship with Lisa Jackson,” the group boasted in December 2008. “We now very much look forward to working with her in her new role.”

Jackson was a former EPA official who joined the senior ranks of the New Jersey Department of Environmental Protection in 2002. In 2006, she was promoted to the state agency’s top job. During her time as an environmental official in New Jersey, Jackson took a hard line against the Bush administration, which refused to impose carbon caps on the U.S. economy.

She played a leading role in the creation of a carbon cap-and-trade scheme covering New Jersey and nine other Northeastern states, a program that was designed to put pressure on the federal government to follow suit.

New Jersey was also one of the states behind a landmark Supreme Court decision in 2007—Massachusetts v. EPA—which dramatically expanded the federal government’s authority to regulate carbon dioxide and other greenhouse gases under the Clean Air Act.

Once confirmed as EPA administrator, Jackson tried to expand carbon cap-and-trade beyond the Northeast into all 50 states. At first, the Obama administration proposed national cap-and-trade legislation, but even the Democrats running Congress at the time refused to go along.

The centerpiece of the EPA’s go-it-alone approach, dubbed the Clean Power Plan, was completed in Obama’s second term by Jackson’s successor, Gina McCarthy—another architect of the Northeast’s carbon cap-and-trade scheme.

And emails obtained under public records laws by the Energy and Environmental Legal Institute show close coordination between the EPA and environmental groups—including the Sierra Club and the Natural Resources Defense Council—throughout the entire regulation-making process.

The National Resources Defense Council even wrote the legal blueprint used by EPA officials to create the Clean Power Plan, according to The New York Times.

And yet, despite Jackson’s close ties to the environmental left, there was never any serious campaign to sink her nomination. Quite the opposite, in fact: The Senate confirmed her by unanimous consent two days after Obama’s inauguration.

But today, groups like the Sierra Club and the Natural Resources Defense Council are trying to impose a wildly different standard: If you oppose the current administration’s policies, you are immediately disqualified from leading the EPA.

Honestly, if that’s the new rule, then why even bother with elections in the first place?

But there’s a much bigger problem for the environmental left. Opposing Pruitt’s nomination and casting him as an extreme figure ignores—and insults—the Democrats and blue-collar voters who also believe the EPA went too far during the Obama years. The Clean Power Plan, for example, would impose on states a host of carbon-reduction and renewable energy mandates that trade unions have opposed. A number of unions even joined Pruitt and more than two dozen other state attorneys general in a lawsuit against the Obama EPA, which resulted in a rare Supreme Court stay of the Clean Power Plan.

“The Supreme Court made the right decision in freezing the implementation of the EPA’s Clean Power Plan,” the International Brotherhood of Electrical Workers said when the stay was issued in February. “The problem of human-made climate change is real, but these rules would have unnecessarily disrupted our power grid and cost thousands of good jobs—two things our economy can’t afford.”

Before Donald Trump’s surprise victory in the presidential election, environmental groups were betting that legal challenges to the Clean Power Plan would fail and the Supreme Court would ultimately lift the stay. Now the regulation is “dead,” as David Bookbinder, the former top climate lawyer at the Sierra Club, recently told Politico. But the current leaders of national green groups have vowed to fight on.

That is their right, of course, but maybe they should pause for a moment and reflect on the warning they received eight years ago from the blue-collar wing of the Democratic Party.

“In Massachusetts v. EPA, the court stated that it believed that greenhouse gases are air pollutants under the Clean Air Act,” U.S. Rep. John Dingell, a Michigan Democrat, told a 2008 committee hearing. “This is not what was intended by the Congress and by those of who wrote that legislation.”

Dingell, who retired in 2015, would know. As the longest-serving member of Congress in history, he was there when the Clean Air Act was written in 1970.

He predicted a “glorious mess” of regulatory action and litigation that would affect “potentially every industry … and every person in this country” if the EPA imposed greenhouse gas limits without gaining new authority from lawmakers. The “inherently political decisions” behind such regulations “should be made by the Congress,” Dingell said.

And yet, after a heavily Democratic Congress rejected greenhouse gas legislation in 2010, the Obama EPA ignored these warnings and created the “glorious mess” anyway.

Environmental groups and their donors—especially California billionaire Tom Steyer—mounted a massive defense of the Clean Power Plan and the rest of the Obama administration’s climate agenda in the 2016 election, but it didn’t work.

Dingell’s home state of Michigan voted Republican in a presidential election for the first time in 28 years, part of a much larger voter revolt across the industrial Midwest.

Environmental groups now have a choice: Accept they have a problem with the blue-collar wing of the Democratic Party or pretend the 2016 election never happened.

Based on their reaction to the Pruitt nomination and their continued defense of the EPA’s “glorious mess,” don’t expect the make-believe to end anytime soon.

Note: This article was originally published by CompleteColorado.com.