To Drain the Swamp, Trump Must Reform Agricultural Policy 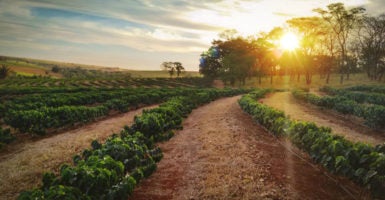 There’s real hope that the Trump administration will shake things up in Washington, D.C. This includes getting rid of the cronyism and the status quo that helps special interests at the expense of everybody else.

This change is needed, and it’s especially needed when it comes to agriculture.

Imagine an industry in which taxpayers provide handouts to multimillion-dollar businesses when they don’t generate as much revenue as they hoped. Or imagine the government intentionally driving up food prices to help special interests at the expense of consumers, particularly hurting the poor.

Then imagine an industry enjoying record high prices, but federal taxpayers being forced to bail it out when prices come down from these record highs.

It doesn’t require much imagination because this is current agricultural policy.

Cronyism and massive federal intervention are the norm, not the exception to the rule. We don’t have a “safety net” anymore, but a system that uses the pretext of a safety net to insulate many agricultural producers from competing in the market.

Federal policymakers need to free up farmers. They need to free farmers and ranchers from crushing federal regulations.

They also need to allow farmers to freely compete in the marketplace, and reap the financial reward of being more efficient and better managed than their competitors.

In other words, they should be allowed to operate just like any other business.

This doesn’t mean there wouldn’t be a taxpayer-funded safety net. As we move away from subsidies, there should still be protection from major crop losses. This is what most people would likely think is the federal safety net in the first place.

The federal crop insurance program should still exist, as would key disaster assistance programs that are in the commodity title of the farm bill. The only difference would be that to get assistance, there must be a major crop loss.

This means there would be no more indemnities after farmers have bumper crops or taxpayer handouts to cover lower-than-expected revenue due to ordinary business risks. Such change is just common sense.

Reforming the $15 billion safety net is certainly a cost issue for taxpayers, but the need to move away from the status quo goes way beyond the costs.

Among other things, subsidies distort planting decisions, discourage innovation and private risk management, and encourage agricultural practices, such as planting on marginal lands, which may be harmful to the environment.

Farmers and ranchers pride themselves on being independent, so it shouldn’t be a surprise that at least some farmers and ranchers say they don’t want to take subsidies but feel compelled to because other farmers will be taking federal taxpayer dollars.

Agricultural producers want to meet the needs of the market, but will feel compelled to make planting decisions based on the incentives that are afforded them through subsidies.

The Trump administration can lead on efforts to free up farmers. It’s past time to get rid of the status quo and put faith in farmers, as opposed to treating them as inferior to other business people.

Of course, the cronies and the proponents of the status quo won’t like even the smallest changes. There’s possibly no area of policy that will be as difficult to change as agricultural policy. But this is why bold leadership is so desperately needed. Already, it appears the Trump administration is going to make sure things aren’t “business as usual” in many policy areas.

Let’s hope this leadership mindset applies to agriculture as well.