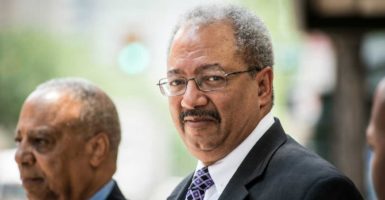 Another U.S. congressman is heading to prison for criminal charges related to earmarks—the once-prolific practice of directing taxpayer money to special interests.

Former Rep. Chaka Fattah, D-Pa., faces up to 10 years in prison for criminal behavior that, according to The Washington Post, included money laundering and bribery. He was sentenced Monday by U.S. District Judge Harvey Bartle.

Fattah, who represented Pennsylvania’s 2nd District from 1995 to 2016, was found guilty of federal corruption charges relating to earmarks in June.

Earmarks also played a role in the demise of former Rep. Duke Cunningham, R-Calif. Cunningham, who in 2006 was sentenced to eight years in prison for bribery, used earmarks in exchange for lobbyists’ gifts.

The latest episode involving Fattah comes less than a month after House Republicans nearly reinstated the practice of earmarking. Now, critics of earmarks claim Fattah’s case demonstrates why they should be permanently banned.

“This shameful saga again highlights the intersection of pork-barrel earmarks and government corruption,” Curtis Kalin, a spokesman for Citizens Against Government Waste, told The Daily Signal.

During his sentencing hearing Monday, Fattah told the judge that he “helped tens of millions of people,” and was sorry the jury “found him on the wrong side of these questions.”

The jury’s findings, however, told a different story.

In 2007, when Fattah was serving as a congressman, CBS Philly reported that he accepted an “illegal $1 million loan from a wealthy friend to prop up his failed 2007 campaign for Philadelphia mayor.”

According to CBS Philly, part of this loan was repaid with grant money from NASA that Fattah had allocated to an educational nonprofit led by his former employees.

The jury also convicted Fattah of leading a racketeering scheme that included his aides and political consultants and using money from governmental as well as nonprofit entities for his own means.

CBS Philly reported that these schemes included using “$23,000 in nonprofit funds to repay his son’s college loans and [taking] an $18,000 bribe to try to help a friend become an ambassador.”

It was reported that Fattah and his wife, Renee Chenault-Fattah, a former NBC10 news anchor, received the $18,000 from a Porsche they sold, but instead kept the Porsche and used the $18,000 as a down payment for a vacation home in Poconos.

Fattah’s son, Chaka “Chip” Fattah Jr., will likely be serving time in prison over at least part of his father’s sentence. In 2016, the younger Fattah was sentenced to five years in prison after being convicted of using illegally obtained business loans.

Opponents of earmarks say the Fattah scandal should serve as a warning to lawmakers in Washington not to reinstate the practice of earmarks. During the early 2000s, when Republicans controlled Congress and the presidency, earmarks proliferated.

“The Fattah conviction represents yet another lawmaker in prison over earmarks,” Rachel Bovard, director of policy services at The Heritage Foundation, told The Daily Signal. “Before the House GOP votes to reinstate earmarking, they should carefully consider the ramifications. Earmarks result in corruption. Period.”

“This whole case underscores the risks of bringing the pay-to-play nature of earmarks back to Washington,” Ellis told The Daily Signal. “The public is already cynical enough about backroom deals and crony capitalism, cases like this only add fuel to that fire. Congress and the new Trump administration need to be more transparent and accountable [to] taxpayers, not less.”

As Congress prepares to vote on reinstating earmarks in early 2017—after banning them in 2010—conservative leaders say this case should remind lawmakers of the waste and corruption that have become commonplace with earmarking.

“Fattah abused the public trust and deserved the sentence he received,” said Kalin of Citizens Against Government Waste. “The insatiable appetite some members of Congress possess for hijacking taxpayer dollars to enrich themselves or local special interests inevitably leads to criminal schemes such as this.”