Government Intervention in Housing Has Always Been Bad. Here’s Why Today Is No Different. 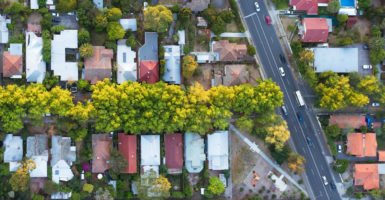 Government meddling in the housing market was a major cause leading to the 2008 financial crisis. (Photo: iStock Photos)

Claudia Sladick is a member of the Young Leaders Program at The Heritage Foundation.

Ever since the federal government embedded itself into the U.S. housing market, it has caused problems that ultimately cost taxpayers trillions of dollars.

Most policymakers point to the New Deal era—when Fannie Mae and the Federal Housing Administration were created—as the beginning of these interventions, but federal meddling in the housing finance sector predates the Great Depression.

Similar interventions were clearly present during, and partly responsible for, three disastrous time periods in U.S. banking history: the 1920s, the 1980s, and the early 2000s.

Before the federal government was involved, mortgage banking began as an entrepreneurial sector of the U.S. economy. Starting around 1870, two industries were born that helped finance different types of real estate development, though both were somewhat related to the rapid expansion of agriculture.

With the expansion of these new markets came “sweeping federal intervention that was designed to change the fundamental structure of the mortgage markets in which they operated,” notes Kenneth Snowden, associate professor economics at the University of North Carolina, Greensboro.

Most of these changes were implemented by the Federal Farm Land Bank Act of 1916 and the National Housing Act of 1934, both of which “encouraged the adoption of the modern long-term, high loan-to-value, fully amortized mortgage loan” offered by federal land banks.

As explained by Judge Glock of Rutgers University, the land banks were the very first government-sponsored enterprises—that is, nominally private agencies that receive backing from the federal government.

The Federal Farm Land Bank system consisted of 12 federal land banks, and those banks went from nonexistent “to some of the largest financial institutions in the nation in 10 years.”

While the entrepreneurial spirit of the early farm borrowers in the United States caused them to initially prefer short-term, renewable loan contracts in efforts to avoid excessive debt and risk, Glock further notes that the long-term loans were packaged “into tax-exempt bonds, whose sale would provide funds for more loans.”

This process allowed for the more rapid expansion of farming endeavors and was favored by both progressive reformers and conservatives because it required no immediate funding from the government.

These long-term, amortized loan contracts, along with the politicization of the federal land banks, caused an abundance of debt. The land banks’ lack of capital made them more susceptible to market turbulence, and their higher losses in comparison to other mortgage companies caused their inevitable insolvency—and bailout to the tune of $125 million—during the Great Depression in 1932.

Unfortunately, the lessons from this disaster were not learned.

Intervention persisted throughout the 1930s, when the federal government continued to push long-term, fixed-rate mortgages on the market. The government justified this effort as necessary to aid in the recovery of the mortgage market.

By introducing a home mortgage insured by the Federal Housing Administration—a fully amortized loan—the federal government began to influence private financial institutions into extending the length of their loan contracts.

These interventions were forced on the market to correct what was widely perceived to be the main problem during the Depression: the need for constant refinancing of mortgages.

The pervasive policy bias against adjustable rate mortgages in favor of fixed-rate mortgages lasted for decades, but the fact that the market consisted mostly of fix-rate mortgages by the 1980s contributed to the Savings & Loan crash and also to Fannie Mae’s (first) insolvency.

As if the Great Depression and the Savings & Loan crisis didn’t provide enough reason to end federal meddling in housing finance, the government further entangled itself in the U.S. mortgage sector.

Officially deemed government-sponsored enterprises in 1989, Fannie Mae and Freddie Mac used their special status to borrow money at below-market interest rates—a fact that increased their profitability and the taxpayers’ risk.

Politicians of all stripes contributed to the expanded use of the government-sponsored enterprises, but President Bill Clinton initiated the key policies that took Fannie Mae from a bit player to a behemoth in the housing market. In 1994, Clinton set an explicit goal of raising the U.S. homeownership rate from 64 percent to 70 percent by 2000.

Among other things, Clinton signed into law the 1992 Government Sponsored Enterprise Act, a law that required the secretary of the Department of Housing and Urban Development to establish three broad, affordable housing goals for Fannie Mae and another government-sponsored enterprise, Freddie Mac.

When 2008 rolled around, Fannie and Freddie were deemed insolvent and put into conservatorship. Taxpayers are now responsible for more than $4 trillion in guarantees.

In all three major historical examples, government intervention shifted the mortgage market toward long-term, fixed-rate mortgages with an increasing level of government backing.

These policies have consistently accomplished two unsettling goals: They have shifted more financial risks onto taxpayers, and they have led to unsustainable levels of debt in real estate markets.

When it comes to the U.S. housing market, the third try at major government intervention was clearly not a charm. It is long past the time for Congress to end these destructive financial policies.