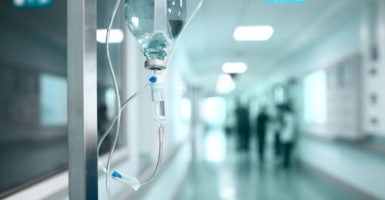 The administration's enrollment figure is based on survey data, which is less reliable than data derived from insurers themselves. (Photo: iStock Photos)

Jared Hatch is a member of the Young Leaders Program at The Heritage Foundation.

One of the most frequently heard claims from the Obama administration is that Obamacare is responsible for insuring 20 million adults who were previously uninsured. But Heritage Foundation research shows the administration’s figure is off by a few million.

The Department of Health and Human Services claims that 20 million people have gained health coverage since the enactment of Obamacare in 2010 through early 2016.

Of those people, 2.3 million are said to be young adults (ages 19 to 25) that gained coverage between 2010 and 2013 as a result of the Obamacare provision allowing them to stay on their parents’ plan until age 26.

However, it is important to note that the administration’s coverage estimates are based on survey data rather than calculating the actual change in coverage in different markets. Though surveys can provide useful information, they are not as precise as using enrollment data taken directly from insurance companies.

A recent analysis by The Heritage Foundation’s Edmund Haislmaier and Drew Gonshorowski uses the more accurate method, taking actual enrollment data from Medicaid and private insurance companies to assess the impact Obamacare has had on coverage.

The researchers found that just over 14 million people gained coverage from the end of 2013 to the end of 2015. Of those 14 million, 11.8 million gained their insurance through Medicaid and 2.2 million through private coverage.

In states that adopted Obamacare’s Medicaid expansion, enrollment surged by 10.4 million. However, Medicaid enrollment also rose by 1.4 million in states that didn’t expand their Medicaid programs. Overall, enrollment in Medicaid and the Children’s Health Insurance Program accounts for 84 percent of the total coverage gains from Obamacare since 2014.

Though only two full years of data are available, Obamacare appears to be having less of an impact on both private and public insurance markets after its first year of implementation.

For example, while the individual market saw an upsurge of 40 percent in 2014 (the first year of Obamacare’s implementation), it drastically slowed in 2015, with enrollment growth of just 7 percent.

Likewise, the law seems to be having less impact on the fully insured employer group market. In 2014, enrollment in that sector fell by 11 percent, but in 2015, it nearly broke even, decreasing by only 2 percent. Medicaid enrollment also experienced a similar trend. In states that expanded, enrollment increased 23 percent in 2014 but slowed to 4 percent growth in 2015.

Understanding exactly how Obamacare has affected health coverage is important as Congress works to repeal Obamacare and replace it with market-based reforms in the coming months.