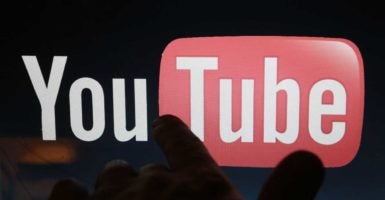 The latest video under restriction, “Born to Hate Jews,” was removed from YouTube Monday night but then later restored and placed under YouTube’s “restricted mode” after PragerU filed an official complaint.

“YouTube has entirely removed PragerU’s new video with Kasim Hafeez, a British Muslim who is a pro-Israel activist,” PragerU announced Monday on its website.

The restricting of PragerU videos is no new development from YouTube, however.

In October, YouTube restricted 21 of PragerU’s educational videos. Some of the videos under restriction in October included “Are The Police Racist?,” “Why Don’t Feminists Fight for Muslim Women?,” “Why Did America Fight the Korean War?,” “Who’s More Pro-Choice: Europe or America?,” and “What ISIS Wants.”

According to PragerU’s website, YouTube is now restricting 18 of its videos, which amounts to over 10 percent of its content. But the pro-Israel video was entirely removed.

In “Born to Hate Jews,” Hafeez discusses how he was indoctrinated with anti-Semitic views and raised to hate the Jewish people.

“Within hours of the video’s release Monday morning, YouTube flagged it for ‘hate speech’ and took it down. PragerU is disputing YouTube’s removal of the video,” said an announcement on PragerU’s website.

PragerU then filed a “formal complaint” to YouTube and Google.

YouTube has since removed the “hate speech” flag and now lists the video under YouTube’s “restricted mode,” according to PragerU’s website.

Videos that fall under the “restricted” category, according to YouTube, contain vulgar language, violence and disturbing imagery, nudity and sexually suggestive content, and portrayal of harmful or dangerous activities.

These age-restricted videos “are not visible to users who are logged out, are under 18 years of age, or have restricted mode enabled,” according to YouTube.

“Many families enable restricted mode in order to keep inappropriate and objectionable adult and sexual content away from their children—not to prevent them from watching animated, age-appropriate, educational videos,” according to PragerU’s website.

The Daily Signal contacted YouTube about the restrictions on “Born to Hate Jews” and YouTube responded saying that restricted videos are based on feedback from viewers and that sometimes videos are mistakenly flagged as restricted.

YouTube, however, did not wish to be directly quoted.