How States Can Shape Obamacare’s Replacement 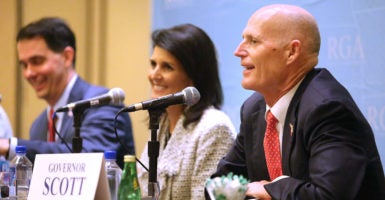 Governors such as, from left, Scott Walker of Wisconsin, Nikki Haley of South Carolina, and Rick Scott of Florida, as well as state insurance commissioners, can help shape a new health care plan while regulating their own insurance markets. (Photo: Joe Burbank/TNS/Newscom)

As Republicans prepare to hammer out the details of a replacement for Obamacare, governors and state insurance commissioners are asking for a seat at the table.

Under the Affordable Care Act, much of the regulatory framework that in the past fell to states and their respective insurance commissioners was transferred to the federal government, which created blanket mandates for both consumers and insurers.

But as Republicans have begun discussions of repealing and replacing the Affordable Care Act—with action coming as early as January—states and their executive branches have the opportunity to help map out the future health insurance market.

“There’s going to be the opportunity to say we can actually start from scratch, but we’ve been in the mode of trying to work within the parameters of the immense amount of regulation under the Affordable Care Act that it’s difficult to switch gears and think about things in a whole new light,” Mia Heck, director of the health and human services task force at the American Legislative Exchange Council, or ALEC, told The Daily Signal.

“It’s a great problem to have, but it’s just a lot to think about,” Heck continued.

In recent years, policymakers have been dealing with “top-down framework” for the health care market, that being the Affordable Care Act, Heck said. But now that Republicans are gearing up to repeal the law and pass a replacement plan, there’s an opportunity for states—and ALEC—to have a seat at the table.

“We’re going to have the opportunity to talk about what would be best for states so they can increase competition and choice in their health care markets, which will result in lower costs and better quality of care,” Heck said. “It’s an exciting time in health care.”

Already, state executives are making it known that they want to play a visible role in shaping Obamacare’s replacement.

“Governors will be very, very active and engaged,” Frederick Isasi, who oversees health policy at the National Governors Association, told The Hill. “They really are one of the few groups who are, in this very tangible day-to-day way, are living the results of the policies.”

And congressional leaders are heeding their calls.

Last week, House Majority Leader Kevin McCarthy, along with the current chairs and incoming chairs of three House committees, sent a letter to governors and insurance commissioners asking for their help with crafting Obamacare’s replacement.

“Our values, based on the principles of federalism, drive a philosophy that states should have the freedom and flexibility to create options that are best for patients,” the lawmakers wrote. “Insurers should compete for consumer business and treat patients fairly. And Americans should have access to the best life-saving treatments in the world.

“Working as a team, with your help and creative ideas, we can achieve our mutual goal of putting patients first.”

Back to the States

Though GOP lawmakers are still in the process of mapping out their blueprint for Obamacare’s repeal and replacement, health policy experts say lawmakers in Washington need to eliminate the insurance regulations enacted at the federal level that the Affordable Care Act put in place.

“What the Affordable Care Act did was wipe away decades of experience at the state level managing insurance,” he continued.

Among the insurance regulations included in the health care law was the essential health benefits package, a list of 10 services that all insurance plans were required to cover.

But if Congress follows through on its promise to repeal Obamacare, states and their insurance commissioners could once again manage their own insurance plans and regulations, Heck and Hederman agreed.

“[Congress] needs to return [to states] the traditional responsibility of determining what is the right plan for their citizens that states have always enjoyed,” Hederman said.

Like the essential health benefits package, the Affordable Care Act also changed the rating rules insurers were required to adhere to. The health care law prohibited insurers from limiting or denying coverage to those with pre-existing conditions and limited how much insurers could price premiums based on age.

But if states were given the authority to control insurance regulations, they could adjust their rating rules, Heck said.

“They’re going to have a lot to take into consideration,” she said of state lawmakers, “because it’s going to be a whole new opportunity to determine what their health insurance regulatory framework should look like.”

In addition to giving governors and insurance commissioners the authority to craft insurance regulations based on their own jurisdictions, an Obamacare repeal will allow states to implement their own Medicaid reforms.

Congress passed a bill earlier this year repealing key provisions of Obamacare, including the Medicaid expansion, and if a repeal bill passed in 2017 included a rollback of Medicaid expansion, states would then have more authority over the design of the program, Heck said.

Already, some state lawmakers are looking forward to changes to the Medicaid program.

Maine state Sen. Eric Brakey, a Republican who chairs the Health and Human Services Committee, said he would like to see Medicaid turned into block grants or allow beneficiaries to set up health savings accounts.

“Anything we can do to put the purchasing power back in the hands of the patient,” Brakey told The Daily Signal.

Health policy experts, meanwhile, say states should be encouraged to use existing and new waivers to change their Medicaid programs.

One such waiver, Section 1332, was implemented under the Affordable Care Act and exempts states from provisions of the health care law. States are then allowed to pursue new approaches to health care.

During debate over the waivers, the bipartisan National Governors Association encouraged the Obama administration to provide states with the “flexibility needed” to pursue them.

But late last year, the Department of Health and Human Services implemented strict regulations on proposals submitted by states, which limited their ability for reforms.

A second waiver, Section 1115, was implemented under the Social Security Act and allows states to use Medicaid dollars in ways not permitted under federal rules.

Under a Trump administration, health policy experts say they’d like to see more flexibility from the executive branch in terms of the reforms states can pursue using the waivers.

But by using a Section 1332 waiver, which Hederman said would need to be revamped, states could “regain control of their health insurance market from the federal government.”

Though congressional leaders haven’t signaled whether they plan to include the Section 1332 waivers in an Obamacare replacement plan, McCarthy asked governors and insurance commissioners to gauge their interest in pursuing them next year.

Still, Republicans in Congress are continuing discussions over how to repeal Obamacare, and they haven’t yet presented a plan that would replace the law.

But McCarthy’s letter, coupled with the urging of the National Governors Association, suggests that states will play a greater role in mapping out the new proposal.

“The one-size-fits-all solution that the Affordable Care Act implemented has not worked,” Hederman said. “The evidence is in, and the [Affordable Care Act] did not work. Let’s give the insurance authority back to the states to best meet the needs of the population.”