The Lessons Today’s Leaders Should Take From Pearl Harbor 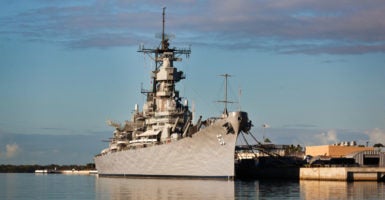 At sunrise on this day in 1941, the Japanese launched a surprise attack on the American naval base at Pearl Harbor, Hawaii, having sailed across the Pacific Ocean unnoticed.

In addition to the 19 ships destroyed, 2,403 American soldiers were killed and 1,178 wounded in the attack.

While this attack was 75 years ago, there are pertinent lessons for today’s leaders to learn from how America handled it.

The Japanese were motivated by many factors in striking the U.S., among them deterring America from intervening in their imperial conquests in the Pacific.

Though the Japanese succeeded in temporarily crippling the U.S. Navy, their gamble backfired and inadvertently facilitated America’s rise as a global military power and the defeat of the axis powers.

America responded to the attack quickly and decisively. President Franklin Delano Roosevelt addressed Congress on Dec. 8, calling the attack “a date which will live infamy.” In that speech, he also declared that “all measures be taken for our defense.”

The next day, the U.S. Senate voted 82-0 to declare war on Japan, while the House of Representatives approved the resolution 388-1, officially entering the United States into World War II.

Hundreds of American men volunteered upon learning this news. Women entered the labor force at unsurpassed levels, not merely to replace the jobs vacated by men at the time, but to do their part to support the war effort—immortalized by the image of “Rosie the Riveter.”

In the ensuing months, the country rebuilt its Navy, thousands of men enlisted, and America took its first steps in fighting back against the oppressive forces on both sides of the planet.

The war effort displayed the resolve, commitment, and patriotism of the American people, and in the ensuing campaigns of the Pacific, our military did not falter amid enormous sacrifices and losses.

Ultimately, in both Asia and Europe, America’s commitment and the dedication and heroism of its service members saved the world from tyranny and the destruction of free society.

America today may not face the same imminent danger it faced in 1941, but our leaders should still take lessons from the events that preceded Pearl Harbor. Many of those developments are what made the U.S. vulnerable to attack in the first place.

Then, as has too often been the case in American history, politicians wrongly assumed that the previous major war we had faced would be our last. As a result, in the years after World War I, we drew down our military dramatically and our armed forces were ill-prepared for combat when Congress declared war on Japan.

Though America was able to rise up and meet that challenge, the price for our lack of readiness was only overcome through the sacrifice borne by our greatest generation.

Today, at the fringes, American resolve is being tested by Russia’s aggression in Crimea and China’s development of artificial islands in the South China Sea. Terrorist groups continue the fight to destroy our free society. And rogue nations such as Iran and North Korea remain major threats in their respective parts of the world.

Our government should be committed to rebuilding and sustaining a military that is so strong that no one would dare challenge America—a strategy President Ronald Reagan referred to as “peace through strength.”

In remembering “the date which will live in infamy,” Americans must not forget the sacrifices made for our freedoms, and we cannot afford to take our national security for granted.