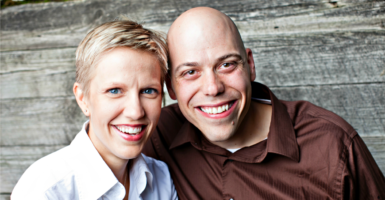 Filmmakers Carl and Angel Larsen say they wish to tell stories about God’s design for marriage between one man and one woman, without fear the government will punish them for not promoting same-sex marriage. (Photo: Alliance Defending Freedom)

A Minnesota couple is suing state officials to allow their film production company to celebrate marriage as a man-woman union without being forced, against their biblical beliefs, to promote same-sex marriage.

Carl and Angel Larsen, of St. Cloud, Minnesota, say they run Telescope Media Group as a way to deploy their storytelling ability and production services to glorify God.

“The Larsens desire to counteract the current cultural narrative undermining the historic, biblically orthodox definition of marriage by using their media production and filmmaking talents to tell stories of marriages between one man and one woman that magnify and honor God’s design and purpose for marriage,” the lawsuit filed Tuesday in the U.S. District Court for the District of Minnesota says.

Alliance Defending Freedom, a Christian legal organization, filed the lawsuit on behalf of the Larsens and Telescope Media Group, which they own.

“Because of their religious beliefs, and their belief in the power of film and media production to change hearts and minds, the Larsens want to use their talents and the expressive platform of [Telescope Media Group] to celebrate and promote God’s design for marriage as a lifelong union of one man and one woman,” the suit says.

Minnesota government officials argue that private businesses face criminal penalties if they promote a marriage between a man and woman but refuse to promote a same-sex marriage, the Larsens’ lawyers at the Christian legal group Alliance Defending Freedom say.

“Filmmakers shouldn’t be threatened with fines and jail simply for disagreeing with the government,” Jeremy Tedesco, senior counsel at Alliance Defending Freedom, said in a formal statement.

“Filmmakers shouldn’t be threatened with fines and jail simply for disagreeing with the government,” @Jeremy_Tedesco says.

If convicted after criminal prosecution under the Minnesota Human Rights Act, the Larsens face a fine of $1,000 and up to 90 days in jail, according to the lawsuit. They also could be ordered to pay compensatory and punitive damages up to $25,000.

The Larsens, who are in their mid-30s and have been married for 14 years, are challenging the law before Minnesota officials take any action against them and their company.

The law in question is the Minnesota Human Rights Act.

“The law does not exempt individuals, businesses, nonprofits, or the secular business activities of religious entities from nondiscrimination laws based on religious beliefs regarding same-sex marriage,” the Minnesota Department of Human Rights website says.

The Larsens simply desire to use their unique storytelling and promotional talents to convey messages that promote aspects of their sincerely held religious beliefs, or that at least are not inconsistent with them. It is standard practice for the owners of video and film production companies to decline to produce videos that contain or promote messages that the owners do not want to support or that violate or compromise their beliefs in some way.

The Daily Signal sought comment from both the Minnesota Attorney General’s Office and the Department of Human Rights, but neither had responded by publication.

The company has created content for clients such as the Billy Graham Evangelistic Association and LifeLight, an annual Christian music festival held near Sioux Falls, South Dakota.

“Every American—including creative professionals—should be free to peacefully live and work according to their faith without fear of punishment,” Tedesco said in a release from Alliance Defending Freedom. He added:

For example, a fashion designer recently cited her ‘artistic freedom’ as a ‘family-owned company’ to announce that she won’t design clothes for Melania Trump because she doesn’t want to use her company and creative talents to promote political views she disagrees with. Even though the law in D.C. prohibits ‘political affiliation’ discrimination, do any of us really think the designer should be threatened with fines and jail time?

French fashion designer Sophie Theallet published an open letter  Nov. 17 saying she would not dress President-elect Donald Trump’s wife, the future first lady, because of disagreements with him and urged other fashion designers to do the same.

Last week, American fashion designer Tom Ford said on TV’s “The View” that he would not dress Melania Trump, in part because “she’s not necessarily my image.”

“The Larsens simply seek to exercise these same freedoms, and that’s why they filed this lawsuit to challenge Minnesota’s law,” Tedesco said.