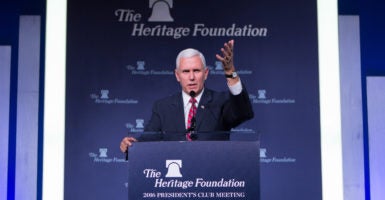 Vice President-elect Mike Pence asserted Tuesday night that the Trump administration will have an aggressive first 100 days in office that includes rebuilding the military, repealing Obamacare, and naming a justice to the Supreme Court.

The Indiana governor and former U.S. House member said he has visited Capitol Hill about the agenda and issued a warning to GOP lawmakers.

“I told my former colleagues to buckle up, vacation is over,” Pence said to laughter from the audience.

Pence spoke Tuesday night at The Heritage Foundation’s President’s Club Meeting, held at the Trump International Hotel in Washington, D.C., in front of about 700 people in the large ballroom. His speech came just 44 days before Donald Trump is inaugurated the 45th president. The Heritage Foundation is the parent organization of The Daily Signal.

Pence explained that nominating the next Supreme Court justice would be a key event in the first 100 days.

He noted the list of potential Supreme Court nominees that The Heritage Foundation helped compile was a “gold mine of conservative jurists.” He said Trump will “appoint a justice to the Supreme Court in the mold of the late, great Antonin Scalia.”

Pence went on to talk about plans to tackle the Affordable Care Act, better known as Obamacare.

“Our president-elect is going to be in the promise-keeping business and we are going to repeal Obamacare lock, stock, and barrel,” Pence said to loud applause.

“We have asked Congress to put on his desk with all deliberate speed a repeal of Obamacare and replace it with free-market reforms,” Pence added.

Pence talked about the state of the American military. He said the average military planes are older than his son, who is in the Marines. He noted that the Army is the smallest it has been since World War II, while the number of Navy ships has been cut by nearly half and the the Air Force is one-third smaller.

“Ronald Reagan taught us that peace comes through strength. … This administration has walked away from its commitment to be that arsenal of democracy to the world,” Pence said. “The Obama era of weakening our national defenses is over.”

Pence expressed his gratitude to The Heritage Foundation for its help in the presidential transition, and said that the think tank’s former president, Ed Feulner, “has shown up each and every day at the transition office of the president of the United States.”

“We will continue to draw on the extraordinary intellectual creativity of The Heritage Foundation. We truly believe the president-elect received a mandate to lead and you know something about that,” he said.

Honored to have the opportunity to address the 2016 @Heritage President's Club Meeting. Thank you for your support! pic.twitter.com/H5yxMnqvk4

Some movement conservatives who had doubts about Trump during the presidential campaign are very hopeful that Pence will play a powerful role in the administration, having built a strong conservative record in the House and later as governor of Indiana.

Jim DeMint, president of The Heritage Foundation and a former South Carolina senator and House member, introduced the vice president-elect.

DeMint recalled that when they served in the House together, they were “called to the carpet” at the White House during a meeting with President George W. Bush, Vice President Dick Cheney, and Bush adviser Karl Rove, who were trying to pressure them to vote with the president or “our careers would be over.”

During the introduction, DeMint noted to the crowd, “It is something really sweet to be in the Trump Hotel a few blocks from the White House.”

During his remarks, Pence noted the commonalities between himself and the president-elect, noting a significant exception.