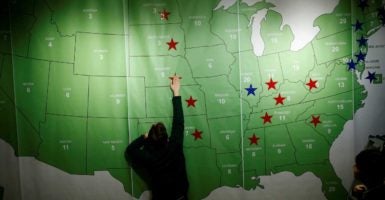 Forty-seven percent of Americans are in favor of retaining the Electoral College, according to a Gallup poll. (Photo: Kim Hong-Ji/Reuters/Newscom)

Following President-elect Donald Trump’s victory over Hillary Clinton, in which Clinton appears to have won the national popular vote, there have been calls to abolish the current presidential election system. However, a new poll shows that the Electoral College has increased in popularity.

Forty-seven percent of Americans are in favor of retaining the Electoral College, while a similar percentage (49 percent) would favor a popular vote, according to a recent Gallup poll.

The Electoral College process is described in the Constitution and is how presidents are selected. States are assigned electors by their combined total of congressmen plus senators.

These electors, appointed by the states and the District of Columbia, are pledged to specific candidates. Though the states can choose their method of selecting electors, every state since the Civil War has opted for popular elections.

There has been considerable debate regarding whether the college should exist, following Trump’s victory.

Democratic Sen. Barbara Boxer of California has introduced a constitutional amendment to eliminate the Electoral College. The Daily Kos and users at MoveOn.org have started petitions garnering hundreds of thousands of signatures to abolish the Electoral College altogether.

Former Democratic presidential nominee Al Gore, who lost the Electoral College but won the national popular vote in 2000, recently stated that he supported getting rid of the institution.

By contrast, a recent USA Today editorial defended the Electoral College as a means to balance the interests of the urban and less populated parts of America distinguished in separate states:

Those clamoring to dump the system cobbled together by the nation’s Founders—which gives each state as many electoral votes as it has members of Congress—should be careful what they wish for … If the national popular vote were the ultimate decider, candidates would gravitate toward the voter-rich big cities and their suburbs and ignore everyone else.

The electors will cast their official vote on Dec. 19.

The Gallup poll was conducted among 1,051 adults living in the United States, and has a 4 percent margin of error with a 95 percent level of confidence.