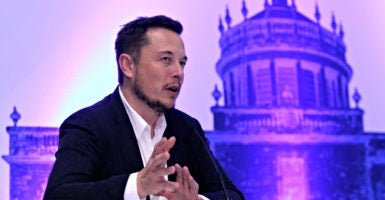 A conservative advocacy group has a special name for liberal bloggers who have rushed in to defend the business practices of Elon Musk, the multibillionaire co-founder of taxpayer-funded renewable energy and space technology companies. It calls them “stoogers.”

Despite “mounting evidence of cronyism by his crumbling empire, Elon Musk has tapped stooge-like left-wing bloggers to come to his defense,” according to a press release from Citizens for the Republic, a grassroots conservative group based in Alexandria, Virginia.

“Musk should not be permitted to bail out his own companies with taxpayer money,” @dianasbpa says.

The group bitingly defines a “stooger” as “a liberal person … living in their basement spewing left-wing prevarications and slander via blogs, which few read.”

For months now, Citizens for the Republic has been sharply critical of Musk and the government subsidies that flow into his companies. In recent days, however, liberal bloggers and left-leaning news outlets have published articles raising questions about the political action committee’s motivations, objectives, and funding sources.

Diana Banister, a partner in Shirley & Banister Public Affairs and executive director of Citizens for the Republic, told The Daily Signal in an interview that she suspects the blogs “received their marching orders from Musk” in the aftermath of the November elections.

With Donald Trump about to move into the White House, Musk knows that lawmakers may be more inclined to move against “crony government deals” that benefit his companies, Banister said.

Citizens for the Republic keeps tabs on Musk’s corporate enterprises at the “Stop Elon From Failing Again” website.

“If Musk is suddenly afraid of us and what we are exposing, this might be his reaction to the election results,” Banister said. “He’s panicked and so are his supporters, and this might explain why you see these obscure left-wing blogs popping up to attack us.”

The Daily Signal sought comment from two of Musk’s companies, SolarCity and Tesla Motors, on the criticism of  his business practices and the allegation that he recruited bloggers to defend him. Neither organization has responded.

Musk, 45, is a South African-born, Los Angeles-based business mogul who has gained fame for his efforts to combat global warming and to establish a human colony on Mars.

But Musk also has been subjected to widespread criticism for pulling in billions of dollars in government subsidies for companies that produce electric cars, sell solar panels, and launch rockets into space.

Tesla Motors Inc., SolarCity Corp., and Space Exploration Technologies Corp., widely known as SpaceX, cumulatively have benefited from about $5 billion in government subsidies, according to data compiled by the Los Angeles Times from government sources.

Tesla and SolarCity consistently have reported net losses while SpaceX, as a private outfit, does not release financial reports to the public. On Nov. 17, Tesla shareholders approved a $2 billion acquisition of SolarCity.

Securities and Exchange Commission filings show that Musk was the largest shareholder in both companies. The merger means that Musk could sell electric cars and solar roofs under one corporate brand.

But without taxpayer-funded support, these companies could not survive, Banister told The Daily Signal.

“Musk should not be permitted to bail out his own companies with taxpayer money,” she said. “But that’s what happened with this acquisition.”

One of the blogs Banister cites as putting out what she views as skewed and misleading material can be found at Teslarati.com.

A Nov. 24 post there charges that Citizens for the Republic overlooks subsidies the oil and gas industry receives from the federal government. The post says “fake news everywhere” gives Musk good reason to be suspicious that his competitors in the fossil fuel industry lurk behind coverage that is critical of his enterprises.

Musk himself tweeted Nov. 22:  “Can anyone uncover who is behind these fake pieces?”

Can anyone uncover who is really writing these fake pieces? Can't be skankhunt42. His work is better than this. https://t.co/Qs69AFMGE5

“Let the trolls launch their slings and arrows Elon’s way,” the Teslarati.com post says. “They will not deter him from moving toward his goal—a world where fossil fuels stay in the ground and abundant renewable electricity from the sun is the order of the day.”

In a press release titled “Bloomberg Smells of Musk,” Citizens for the Republic describes Bloomberg News as a “one-sided, left-wing” media operation. It says the Bloomberg article reads like a propaganda piece that overlooks the fact Musk has received billions in taxpayer funding even though his companies “show no signs of financial stability or success.”

In an online interview about his report on “internet trolls” who have been critical of Musk, Bloomberg Businessweek reporter Paul Barrett says it is difficult to “connect the dots” between Citizens for the Republic and the group’s supporters.

“The dots are that we don’t believe the government should prop up companies or industries, big banks, big abortion, big education, big media, or any others,” Banister said, adding:

The Daily Signal sought comment from Barrett by email, but has not received a response. The Daily Signal also emailed and spoke with a Bloomberg News spokeswoman about responding to Citizens for the Republic, but the outlet has not replied.

Ronald Reagan originally established Citizens for the Republic in 1977, three years before he won the presidency. Conservative activists relaunched the political action committee in 2010 with Banister and Craig Shirley, her partner in Shirley & Banister Public Affairs, as board members.

Shirley, the author of three books on Reagan, also serves as chairman of Citizens for the Republic, a 501(c)(4) nonprofit.  He is founder, chairman, and CEO of Shirley & Banister, and Banister is president of the public relations firm.

In June, Citizens for the Republic set up the Sunlight Project, an initiative “to monitor and expose corruption and cronyism at the nexus of government and business.” The “Stop Elon From Failing Again” website is an extension of this project.