Obama Administration Not Finished Yet With Executive Actions, Regulations 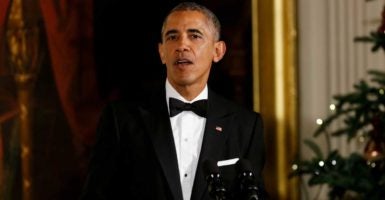 On Monday, President Barack Obama issued his fifth executive order since the Nov. 8 election. In this case, it was to create a National Invasive Species Council to compile a report by 2020 on how to prevent such species from affecting climate change, food safety, and even military readiness.

Executive orders aren’t the only means for Obama to act without Congress before he leaves office on Jan. 20.

A new policy on highly skilled immigrants, restrictions on for-profit colleges, and energy efficiency standards are among the matters that the administration wants that don’t require congressional authorization that the Obama administration is moving aggressively in the post-election to complete before Obama exits on Jan. 20.

“What I can rule out are any sort of hastily added executive actions,” @presssec says.

But what I can rule out are any sort of hastily added executive actions that weren’t previously considered that would just be tacked on at the end. But are there some actions that have been in the pipeline for quite some time that could be announced between now and Jan. 20? That possibility certainly exists, but I don’t have anything to preview at this point.

The fact that Trump could overturn much executive or administrative actions doesn’t appear to have caused pause, as the Federal Register has grown by 9,000 pages since Nov. 8, said Ryan Young, a fellow with the Competitive Enterprise Institute.

Gina McCarthy, the Environmental Protection Agency administrator, seemed eager for more action in a memo to staff sent to employees after the Nov. 8 election, which was obtained by the Washington Examiner.

“As I’ve mentioned to you before, we’re running—not walking—through the finish line of President Obama’s presidency,” McCarthy wrote. “Thank you for taking that run with me. I’m looking forward to all the progress that still lies ahead.”

Whether the regulations or executive actions are hasty shouldn’t really be the key question, said James Gattuso, a senior research fellow who studies regulatory issues for The Heritage Foundation.

“As far as I’m concerned, if it takes a long time to adopt rules or actions, or if they fly through the process, it doesn’t matter if it’s a bad rule,” Gattuso told The Daily Signal.

Regulations, he said, can be more tedious to overturn than executive orders or executive actions. However, the 1996 Congressional Review Act could be used to roll back many of those regulations, Gattuso said.

The law allows Congress, with the president’s signature, to scrap regulations it opposes, bypassing previous legal procedures in place, while forbidding bureaucrats from imposing rules that are substantially the same.

“No president is willing to sign a bill overturning their own regulation, but they are willing to overturn their predecessor’s regulations,” Gattuso said. “This is a once in a decade chance, really a once in several decades’’ opportunity, to roll back regulations.”

House Majority Leader Kevin McCarthy, R-Calif., and 21 House committee chairmen warned against a rush for regulations in a letter to agency heads, pledging to used the Congressional Review Act if need be. The Nov. 15 letter from House Republicans said:

As you are aware, such action often involves the exercise of substantial policymaking discretion and could have far-reaching impacts on the American people and the economy. Considering these potential consequences, we write to caution you against finalizing pending rules or regulations in the administration’s last days.

By refraining from acting with undue haste, you will ensure that agency staff may fully assess the costs and benefits of rules, making it less likely that unintended consequences will harm consumers and businesses.

Moreover, such forbearance is necessary to afford the recently elected administration and Congress the opportunity to review and give direction concerning pending rulemakings.

Should you ignore this counsel, please be aware that we will work with our colleagues to ensure that Congress scrutinizes your actions—and, if appropriate, overturns them—pursuant to the Congressional Review Act.

On Nov. 8, the Federal Register contained 78,300 pages, and as of Dec. 2, it had increased to 87,297 pages, Young said. Further, since Election Day, there were 144 new proposed regulations from federal agencies, and 243 regulations that were finalized.

“We could see a midnight rush the likes of which we haven’t seen before,” Young, of the Competitive Enterprise Institute, told The Daily Signal.