EPA May Finally Have to Answer for the Animas River Spill 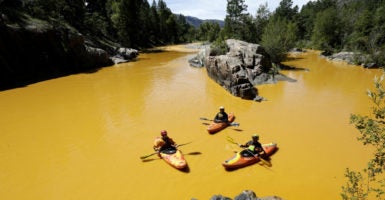 The U.S. Supreme Court has asked the executive branch to give its legal opinion on a lawsuit embroiling the EPA. (Photo: Jerry Mcbride/ZUMA Press/Newscom)

Remember when the Environmental Protection Agency caused a discharge of 3 million gallons of toxic water into the Animas River, and no one was held accountable? Now the Supreme Court is getting involved.

The toxic spill occurred in August 2015 when EPA workers accidentally caused a leak in an abandoned mine near Durango, Colorado.

Contaminants spread into vital water sources that serve Colorado, New Mexico, and the Navajo Nation. The Animas River provides water for drinking, farming, ranching, and tourism in those places.

New Mexico and Colorado are both suing the EPA, and now the Supreme Court has asked the acting solicitor general of the United States, Ian H. Gershengorn, to weigh in on the pending litigation.

This request represents one more chance for the government, and possibly the Trump administration, to hold the EPA accountable for its fiasco.

Accidents by private parties that are remarkably similar to the Animas River spill have led to criminal prosecutions in the past. Consider an example from Alaska:

[One] back-hoe operator accidentally struck an oil pipeline in Alaska in 1994, and 1,000 to 5,000 gallons of oil spilled into the Skagway River. The Environmental Protection Agency had his supervisor—who was at home and off-duty at the time of the accident—criminally prosecuted for negligent discharge under the Clean Water Act.

The article goes on:

A second back-hoe operator accidentally struck open the flooded Gold King Mine of Colorado in August 2015, and 3,000,000 gallons of yellow water laced with mercury, lead, and other toxic heavy metals spilled into the Animas River—a regional source of water for drinking and irrigation. The EPA worked to contain the spill, but it held no one accountable.

The main difference, of course, is the second back-hoe operator happened to work for the EPA.

In October, the Office of the Inspector General, which investigates waste, fraud, and abuse within federal agencies, told congressional staff that “it had found evidence of criminal wrongdoing by the EPA” in relation to the Animas River spill. That included “providing false statements in a criminal investigation and violation of the Clean Water Act.”

But the Department of Justice refused to do anything about it, despite the fact that it routinely goes after private parties for relatively trivial acts, such as the Skagway River spill mentioned above, and a separate incident involving the discharge of “1,000 gallons of sewage into a ditch connected to a local reservoir.”

Taking the EPA to Task

The New Mexico attorney general and the Navajo Nation did what the federal government refused to do: “hold [the agency] to the same standards that [it] would anyone that would have created this situation,” something that EPA Regional Director Shaun McGrath had promised the agency would do right after the spill occurred.

Both New Mexico and the Navajo Nation sued the EPA in federal court. Specifically, New Mexico filed suit against the EPA, Gina McCarthy in her official capacity as EPA administrator, the EPA’s excavation contractor, and several mining companies, requesting “full and just compensation” for the environmental and economic damage caused by the EPA’s spill.

The Navajo Nation’s complaint argued that “after one of the most significant environmental catastrophes in history, the Nation and the Navajo people have yet to have their waterways cleaned, their losses compensated, their health protected, or their way of life restored.”

New Mexico also sued the state of Colorado in the Supreme Court, claiming that the EPA’s spill “was the coup de grâce of two decades of disastrous environmental decision-making by Colorado, for which New Mexico and its citizens are now paying the price.”

New Mexico argues that Colorado should be held responsible for lingering pollution at several mine sites, and for the “hazardous conditions” that led to the EPA turning the Animas River yellow.

As part of the long, complex history of regional mines, some Colorado government officials authorized a mining company to plug drainage tunnels below several mines, causing “the mine’s tunnels and workings [to] fill with potentially billions of gallons of water, essentially transforming the mine into an enormous wastewater storage facility.”

US Supreme Court: What Does the Executive Branch Think?

Now the Supreme Court has asked Gershengorn to file a brief in New Mexico v. Colorado expressing the Obama administration’s views on the matter. The solicitor general represents the executive branch in litigation before the Supreme Court.

President Barack Obama’s Justice Department has refused to prosecute anyone at the EPA, which sends a clear signal as to what it thinks on the matter.

On Oct. 12, members of the House Committee on Oversight and Government Reform and the Committee on Natural Resources sent a stinging letter to the Justice Department.

“By not taking up the case,” the congressmen wrote, Justice officials “give the appearance of hypocrisy, and seem to indicate that there is one set of rules for private citizens and another for the federal government. The EPA disaster deserves the same level of accountability to which private citizens are held.”

If Obama’s DOJ does not act before Jan. 20, a Trump DOJ could send the Supreme Court a brief with a very similar opinion to what Congress and the public have expressed. And the EPA might have to publicly defend its actions before Congress again.

That could become tougher for the agency, because its sole defense for the ongoing lack of accountability is invalid.

At a June oversight hearing, members of the Senate Committee on Environment and Public Works asked Cynthia Giles, head of the EPA’s Office of Enforcement and Compliance Assurance, why the agency had not taken action against any parties responsible for the spill.

Giles stated that “law and enforcement distinguishes between the company who makes and releases pollution and the entities that are trying to respond and clean up pollution that other people created.”

But the EPA is wrong. For proof, read the text of the Clean Water Act, the implementing regulations, and opinions by the Supreme Court and two federal circuits. They all make clear that the government is subject to the Clean Water Act in the same manner as private parties.

The only basis for the EPA’s position is a 2012 EPA memorandum co-authored by Giles herself. But the EPA cannot exempt itself from federal criminal law.

Perhaps the solicitor general will agree. According to their October letter, key members of Congress certainly do.

Thus, the Supreme Court’s request for the solicitor general to get involved provides more opportunity for the federal government to make a choice: Either stop criminally prosecuting private parties for mere accidents, or hold its own actors to the same standards and penalties.