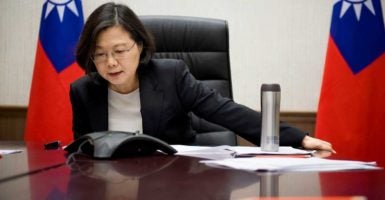 The transition team has announced that President-elect Donald Trump spoke by phone with the president of Taiwan, Tsai Ing-wen Friday. Not only is there nothing wrong with this, it could be a sign of good things to come in America’s Taiwan policy.

U.S.-Taiwan relations operate under a number of restrictions derived from the three communiques with China that form the basis of America’s one China policy. Some of them are a necessary part of honoring America’s decision in 1979 to formally recognize the People’s Republic of China. Many are not.

The restrictions range from the symbolic, yet seemingly arbitrary—like the circumstances under which Taiwan’s Washington representative is permitted to use its historic residence, Twin Oaks, or display its flag—to more critical areas, like interaction between U.S. and Taiwanese military officers.

Building on Trump’s phone call, the incoming administration should review the range of restrictions on interaction between the two countries with an eye to loosening them.

This is an idea that serious people, albeit good friends of Taiwan, have long given serious thought. Sen. Marco Rubio, R-Fla., and Rep. Steve Chabot, R-Ohio, have introduced legislation to get directly at this red tape, as did the Senate version of the 2017 National Defense Authorization Act.

There are other, more pressing issues at stake in U.S.-Taiwan relations. Helping Taiwan get new submarines and fighter jets, for instance, should be a priority. Reiterating the centrality of the Taiwan Relations Act and the “six assurances” that President Ronald Reagan gave to Taiwan in 1982 is important.

We also need to find ways to expand Taiwan’s membership in international organizations, a perennial concern of Congress.

But expanding and regularizing unofficial contact with Taiwan is essential to ensuring we are on the same page politically. Between our militaries, it is vital to integrate the equipment we do provide Taiwan into a credible plan to defend the island and prevent war with China.

The Trump administration should dispatch a Cabinet secretary to Taiwan in its first year to demonstrate the call with Tsai was not a mistake, but a sign of these things to come. This is not a crazy idea either. Cabinet-level visits have been done before. Doing it sooner rather than later will demonstrate that we’re not talking about a long, drawn-out policy review process, but an immediate  adjustment in priorities.

The Trump-Tsai call also points to important restraints on the relationship.

America’s one-China policy is in need of updating, but it should not be discarded. It has served as the basis for a stable relationship with China since 1972.

That stability, in turn, undergirds the peace and economic expansion in the region from which the U.S. derives so many tangible benefits.

Neither an occasional phone call between presidents nor any of the other policy changes suggested here constitute a change in that status quo. And yet, there is so much more that can be done—must be done—with Taiwan short of overturning that long-term policy.