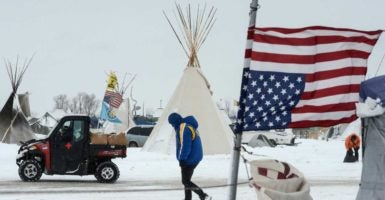 The Department of the Army handed protesters of the Dakota Access oil pipeline a victory Sunday when it announced the project would be re-routed. The decision came on the eve of the government’s Monday deadline for protesters to evacuate their encampment.

For the past several months, members of the Standing Rock Sioux Tribe have waged a campaign against the pipeline, drawing the support of environmentalists and liberal entertainers. They were upset that the pipeline would cross under Lake Oahe in North Dakota. Now, the company installing the 1,172-mile pipeline will have to find another route or appeal to the incoming Trump administration in 2017.

“Although we have had continuing discussion and exchanges of new information with the Standing Rock Sioux and Dakota Access, it’s clear that there’s more work to do,” Jo-Ellen Darcy, the Army’s assistant secretary for civil works, said in the statement Sunday. “The best way to complete that work responsibly and expeditiously is to explore alternate routes for the pipeline crossing.”

It’s unclear what protesters will do Monday, when they face the deadline to leave. Even before Sunday’s decision, North Dakota’s congressman warned that the fight over the pipeline would likely continue.

“The idea that [the pipeline protest] is about the environment is bogus,” Rep. Kevin Cramer, R-N.D., said last week in an interview with Daily Signal editor in chief Rob Bluey.

The pipeline is designed to transport oil from the Bakken oil fields in North Dakota to southern Illinois.

Prior to Sunday’s announcement, Energy Transfer Partners, the company in charge of the project, had estimated it would be fully operational by the end of this year. It is already over 90 percent complete, but environmentalists and citizens of the nearby Standing Rock Sioux Reservation successful halted its construction.

On April 1, tribal citizens founded the “Sacred Stone Camp” near the construction site to protest the pipeline. The group is concerned that it will be constructed close enough to the tribe’s water source, the Missouri River, to cause spillage.

However, according to Time magazine, the pipeline does not pass through tribal land. Since Sacred Stone’s founding, the site has been subject to ongoing protests to halt the pipeline’s construction.

State officials and the Army Corps of Engineers have issued an evacuation notice to protesters, but Cramer said it is unlikely they will comply.

“They have … issued an evacuation notice for the land that the camp is on, the illegal camp, and so as of next Monday [Dec. 5], anyone staying there will be trespassing,” Cramer said.

When asked if he was confident that the protesters would leave by the deadline, the congressman said:

I’m not, because the tribe and others have committed to staying there. I will tell you that the 2 feet of snow or so that they’ve got in the last couple of days probably is a greater distraction than an evacuation notice from the [U.S. Army] Corps of Engineers, but winter can be a very sobering time in North Dakota on the prairie.

>>> Cramer: The Facts About the Dakota Access Pipeline That Protesters Don’t Want You to Know

“What started out as a prayerful, peaceful protest of course has turned into a very violent and aggressive riot in many cases,” the congressman said in his interview with The Daily Signal. “The blending of agitators and out-of-state people with a different agenda than just protection of water for the tribe has created a lot of chaos,” he said.

In the interview, Cramer also rejected the idea that protesters were seeking to defend the environment against the pipeline’s construction.

“This oil is being produced today. It’s being moved now. It’s just not being moved by this efficient, safe means of transportation,” Cramer said. “So the idea that some of this is about the environment is bogus. This oil is going to be produced. So I just think that many of the arguments against it are ironic at best and hypocritical most likely.”

When asked about how he believed the management of federal lands would change under the incoming Trump administration, Cramer expressed optimism that President-elect Donald Trump would handle things differently.

“We own … over $50 trillion … worth of oil and gas. [Trump is] a businessman; he knows what $50 trillion could do for our country,” Cramer said, adding:

Mr. Trump is also an environmentalist. The idea of just exploiting federal lands is something he doesn’t take lightly either, but he’s also smart enough to know that modern technology and appropriate safeguards can be put in place to do it in a safe and reasonable manner while at the same time exploiting it for the benefit of our economy and job creation and, certainly, national security.

This story was updated to include Sunday’s developments.