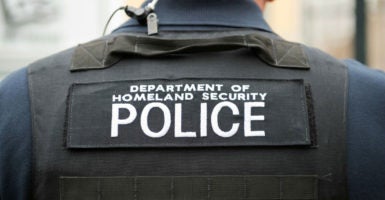 The Department of Homeland Security was created in the wake of the 9/11 attacks and is the third-largest Cabinet department. (Photo: iStock Photos)

President-elect Donald Trump and his soon-to-be-selected secretary of homeland security will have a full plate when they take over in January.

Indeed, there are so many areas for reform and improvement that any efforts to fix the Department of Homeland Security could easily get bogged down.

Luckily, The Heritage Foundation has identified four main priorities that the next administration should focus on.

DHS management needs to be fixed. Its organizational cohesiveness and central leadership continue to present significant challenges that require more work than the Obama administration’s Unity of Effort initiative.

Additionally, the DHS’ office policy should be strengthened to create intra-agency policy, resolve agency disputes, and, above all, drive structural change so that DHS components can work more efficiently as a cohesive unit.

Luckily, the newly released National Defense Authorization Act conference report takes a step in this direction by upgrading the head of the DHS office of policy from assistant secretary to under secretary.

Current immigration laws must be enforced. In fiscal year 2015, DHS data show that only 462,463 removals and returns occurred—the lowest number since 1971. Immigration and Customs Enforcement deported merely 63,000 criminal illegal immigrants from the U.S. compared to 150,000 in 2015.

President Barack Obama’s executive actions on immigration enforcement must be rescinded, and the 287(g) program, which trains and deputizes state and local police to help enforce immigration laws, needs to be strengthened.

Rapid-removal authority under Section 235 of the Immigration and Nationality Act should be expanded to discourage surges of illegal immigration. Additional prosecutors, judges, and agents should be requested so that more cases can be heard and illegal immigrants deported.

The U.S. also needs to make sure these criminal illegal immigrants appear at their designated court hearings by expanding effective “alternatives to detention,” such as GPS tracking anklets.

DHS has a much larger role in domestic cybersecurity due to the passage of the Cybersecurity Information Sharing Act. The primary purpose of that bill was to make information sharing between private and public sectors more efficient.

This sharing will need to be monitored and improved, together with DHS’ intrusion detection and prevention system known as Einstein.

DHS will also need to play a role in helping the Trump administration respond to state-sponsored and directed cyberattacks. The U.S. should deploy all the tools at its disposal, including diplomatic, legal, visa, financial, and others, to retaliate.

There is growing concern over how individuals, whether they are refugees, permanent immigrants, or visitors, are vetted before entering the U.S.

The refugee process takes on average 12-18 months to complete, with background checks being requested through various department databases, including the State Department, DHS, FBI, and National Counterterrorism Center databases.

Interviews are conducted that ask security and country-specific questions. In the case of Syrian refugees, the Syrian Enhanced Review has already started applying additional scrutiny to cases.

Congress needs detailed information from the administration on the nature of the risks incurred in the vetting process, and how it plans to mitigate those risks. Congress and the administration must also work together to begin the much-needed repair of America’s intelligence capabilities.

For regular immigrants and visitors, there is the traditional visa process, which involves a less lengthy but similar vetting process. San Bernardino attacker Tashfeen Malik managed to slip through this system, proving that there is always room for improvement.

Visitors from many countries are able to use the Visa Waiver Program, which does not require an in-person interview in order for the applicant to travel to the U.S.

Instead, VWP countries provide the U.S. with important intelligence on a variety of things, including known and suspected terrorists, serious criminals, and lost and stolen passports, as well as improving their airport security. VWP is a unique tool that is extremely valuable for U.S. security and should be strengthened and expanded.

In order to keep our homeland secure, the next homeland security secretary should prioritize these four issues. These reforms are essential to a cohesive, effective, and efficient Department of Homeland Security that can keep the U.S. safe.