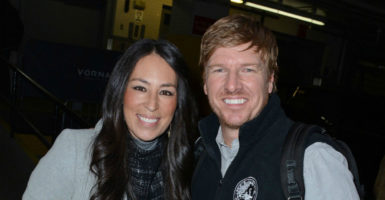 Bullying Christians may be a favorite strategy of the left—but it’s not necessarily an effective one. Chip and Joanna Gaines of HGTV’s popular show “Fixer Upper” may be sending that message without ever opening their mouths.

In what can only be described as a politically motivated witch hunt, BuzzFeed posted a non-story about how the fan favorites attend a church where it’s apparently news that the pastor preaches straight out of the Bible.

In her hit piece (disguised as journalism), author Kate Aurthur implies that Chip and Joanna may be hateful people for attending a church that has the nerve to believe what Scripture says:

So are the Gaineses against same-sex marriage? And would they ever feature a same-sex couple on the show, as have HGTV’s ‘House Hunters’ and ‘Property Brothers?’ Emails to Brock Murphy, the public relations director at their company, Magnolia, were not returned.

Not surprisingly, Aurthur’s piece got instant attention—not much of it good. BuzzFeed readers are angry that the site is trying to destroy a couple that many consider the best duo on HGTV.

“This is the dumbest story I have ever heard,” one reader commented. “It’s like a witch hunt for their beliefs, to try and stir the oil from a pot into the flames of the stove. This kind of article is exactly what is wrong with the media.”

Others fired back that this was a made-up controversy, designed to tear down good people.

“You are inciting a wave of negative attention on this couple for something that indirectly links to them,” another reader said. “That’s not journalism, it’s petty … ”

Even The Washington Post, hardly an ally of Christian conservatives, piled on, posting an op-ed from gay columnist Brandon Ambrosino called “BuzzFeed’s Hit Piece on Chip and Joanna Gaines Is Dangerous.” In it, he talks about the important message of the election, which is that “gotcha” stories like this only reinforce people’s negative opinion of the press.

[This story] validates everything that President-elect Donald Trump’s supporters have been saying about the media: that some journalists—specifically younger ones at popular digital publications—will tell stories in certain deceitful, manipulative ways to take down conservatives. (And really, I can’t for the life of me imagine any other intention of the Gaines story.) … The old strategy of journalists shaming ‘hicks’ is not going to work anymore…

BuzzFeed can’t argue that the same-sex marriage issue is ethically settled, because it isn’t for a sizable population of our country and our world. It is no longer okay—indeed, it never was—to write cutesy articles shaming religious people as homophobic for simply being one of the many millions of Americans in 2016 who attend a religious congregation that does not support same-sex marriage. That is not a good move for activism or journalism.

It most certainly isn’t settled, based on the latest polling from Wilson Perkins Allen, which puts the support for natural marriage at 53 percent almost a year and a half after the Supreme Court tried to redefine it.

Only 37 percent support the view that BuzzFeed seems to imply is the prevailing one.

Interestingly enough, the person who may be the real target of BuzzFeed is the couple’s pastor, Jimmy Seibert. His post-Obergefell message, preached nearly 18 months ago (video here), is the main subject of the article.

What was alarming to the left about his message? He preached the Bible in an age when some churches don’t have the courage to be a moral voice in the cultural darkness.

Pastors who act boldly are seen as a threat—and for good reason. When churches have the courage to preach the truth, people will be challenged to live it—and that scares the devil out of the left.

There are a lot of pastors like Seibert, but many more are needed. My commitment has been and will remain to stand with those who stand for truth. You can help me by signing our note of appreciation to Seibert. Join us in thanking him for being an unwavering witness for Christ.

Also, to hear from Chip and Joanna themselves, click on the video below. I think it will help a lot of people know not only them, but their hearts better.