What to Know About Steven Mnuchin, Trump’s Pick for Treasury 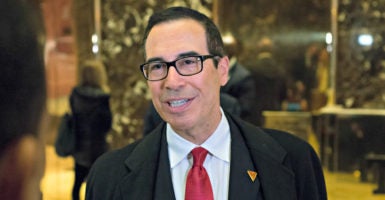 Though not a widely known quantity in Washington, Steven Mnuchin, President-elect Donald Trump’s choice for treasury secretary, has had a seasoned career in high finance, in Hollywood, and, most recently, as finance chairman of the Trump campaign.

“I am honored to have the opportunity to serve our great country in this important role,” Mnuchin, 54, said in a formal statement. “I understand what needs to be done to fix the economy. I look forward to helping President-elect Trump implement a bold economic agenda that creates good-paying jobs and defends the American worker.”

Mnuchin reportedly has a net worth of $40 million.

If confirmed by the Senate, Mnuchin, a former Goldman Sachs partner who has donated heavily to Democrats in the past and once worked for liberal financier George Soros, will play a significant role in much of Trump’s agenda regarding tax policy, trade deals, and infrastructure ambitions, among other policies.

“Steve Mnuchin is a world-class financier, banker, and businessman, and has played a key role in developing our plan to build a dynamic, booming economy that will create millions of jobs,” Trump said in a statement. “His expertise and pro-growth ideas make him the ideal candidate to serve as secretary of the treasury.”

Here are five major things to know about Mnuchin:

His father, Robert Mnuchin, was a top trader at Goldman Sachs, an investment banking, securities and investment management firm. The elder Mnuchin later became an art dealer. Like his father, Steven Mnuchin joined the powerful financial firm at age 22, and stayed for 17 years. He left the firm in 2002.

At Goldman, the younger Mnuchin oversaw trading in government securities, mortgages, money markets, and municipal bonds. He rose to be the chief information officer.

During the presidential campaign, Trump occasionally threw verbal jabs at his opponents for connections to Goldman Sachs, first at Texas Sen. Ted Cruz during the Republican primary and later at former Secretary of State Hillary Clinton during the general election.

It is not clear from news reports how close Mnuchin and Soros were, if at all.

In 2004, Mnuchin departed to start his own hedge fund, Dune Capital Management. Bloomberg News reported that Dune “got hundreds of millions of dollars from Soros.” Dune invested in at least two Trump projects, one in Waikiki, Hawaii, and another in Chicago, according to Bloomberg News.

He also gave to several Republican candidates, including Mitt Romney’s presidential campaign in 2012. But prior to 2012, donations to Democrats far outweighed those to Republicans.

Mnuchin told Bloomberg News the Democratic donations were mostly favors to friends who were Democratic fundraisers.

Mnuchin contributed $2,000 to Obama’s U.S. Senate campaign in Illinois in 2004, when he also gave $500 to Kerry’s presidential campaign.

Also in 2004, he contributed $10,000 to the Democratic Senatorial Campaign Committee.

But he also gave the maximum $2,300 to Romney’s campaign in the 2008 Republican presidential primary.

During the 2012 cycle, Mnuchin mostly contributed to Republicans. He donated $2,500 to Romney’s primary campaign and another $2,500 to his general election campaign. He donated $12,500 to the Republican National Committee in 2012, according to the Center for Responsive Politics.

In the 2016 cycle, though Mnuchin gave $2,000 to the U.S. Senate campaign of Democrat Kamala Harris in California, he also gave $100,000 to the Republican National Committee. He gave $2,700 to Trump’s presidential campaign.

Trump praised what might end up being a target for Democrats during Mnuchin’s confirmation process.

“He purchased IndyMac Bank for $1.6 billion and ran it very professionally, selling it for $3.4 billion plus a return of capital,” Trump said of Mnuchin in his statement. “That’s the kind of people I want in my administration representing our country.”

Mnuchin, with partners, bought IndyMac Bank in 2009 and renamed it OneWest Bank Group. He served as its CEO. The bank had some clashes with California housing advocates. Mnuchin and other investors sold OneWest to CIT Group in 2015.

IndyMac Bank had been taken over by the Federal Deposit Insurance Corp. over allegedly sketchy mortgage practices during the housing crisis, according to National Public Radio.

Kevin Stein, deputy director of a housing advocacy group called the California Reinvestment Coalition, told NPR that under Mnuchin, OneWest continued to be a “foreclosure machine.”

As Trump said, investors bought the bank cheap and sold at a profit. But Stein said the bank foreclosed on 36,000 homes under Mnuchin. The FDIC paid OneWest $1 billion, which Stein said went to “billionaire investors … to cover the close of foreclosing on working class, everyday American folks.”

Such rhetoric from Stein could likely be picked by Senate Democrats during the confirmation process.