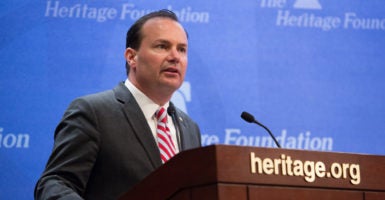 The 2016 election cycle has sent a signal “loud and clear” that the federal government needs fixing, a U.S. senator said Tuesday.

Sen. Mike Lee, R-Utah, voiced his support for 12-year term limits on members in either body of Congress while speaking at The Heritage Foundation this week.

“I’m distressed any time I see the right to vote being diluted by an argument that rests on the following line of reasoning,” Lee said Tuesday at The Heritage Foundation event to announce Heritage’s new research Institute for Constitutional Government. He said:

Whenever you see a member of Congress come back and tell his or her constituents, ‘Look I know we’re all citizens in a free republic and that means you can vote for whomever you want, but given the amount of seniority and authority that I’ve accrued during my time in this or that body of Congress, you should know that if you don’t vote for me you will lose money and power and influence.’

“It’s attaching a very high price tag to our most fundamental of rights, our right to vote,” Lee said. “The best way I can see to eliminate that argument, to take it out, is to limit members of Congress to 12 years of service in either house.”

Lee said he believes there should be a constitutional amendment for term limits.

A 12-year term limit in either chamber of Congress would allow U.S. senators to serve for two terms and representatives to serve for six terms.

Congress needs to be responsible and accountable, he said.

“The American people are frustrated with a government that knows no boundaries,” —@SenMikeLee

“The American people are frustrated with a government that knows no boundaries,” Lee said. He added:

The American people … know that in many respects they are no longer in charge of their own government. That the government that was created to serve them has tried to untether itself from them, moving away from them and becoming a task-master rather than a servant.

Power has been taken away from the people’s elected representatives and “given to unelected, unaccountable government bureaucrats,” Lee said.

“This is a problem because it results in all kinds of lawmaking made by all kinds of government officials who are never subject to elections and therefore have no reason to fear when the people get concerned about new laws,” Lee said.

“Members of Congress have contributed to this problem,” Lee said of giving too much power to bureaucrats.

Along with advocating term limits, Lee spoke at the event about preserving the Constitution.

“In order to avoid criticism and thereby maximize their chances of achieving perpetual re-election, [members of Congress] depart from and are willing to sacrifice constitutional principles that were designed to connect the people with their own government,” Lee said.

“Power has been taken away from the people and moved to Washington,” he added. “Power that was always supposed to be exercised at the state and local level has been federalized.”

The new constitutional institute at Heritage will help “educate members of Congress, their staff, the new administration, and the American people on the importance of our founding institutions to preserving freedom,” a description of the event says.

“The founders tried to forestall creation of a new tyranny by devising an ingenious system, codified in the Constitution, to limit the power of government and preserve individual liberties,” James Wallner, Heritage’s group vice president for research who will head the new institute, said in a statement.

The B. Kenneth Simon Center for Principles and Politics, the Edwin Meese III Center for Legal and Judicial Studies, and the Center on Public Opinion research centers are part of Heritage’s new Institute for Constitutional Government.

There is “a real need for more high-level civic education on college campuses to the general public, to members of Congress, to their staff,” David Azerrad, director of the B. Kenneth Simon Center for Principles and Politics, said on Tuesday.

“One of the things I think that all conservative and libertarians, and progressives who are still committed to the Constitution, need to recognize is that the task of rebuilding limited constitutional government is going to take a long, long time,” Azerrad said.