What a Trump Court Would Mean for Abortion 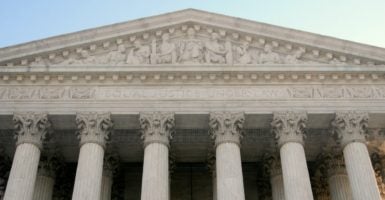 The pro-life movement in America is stronger, more sophisticated, and younger than anywhere else on the planet.

We know how to write legislation and how to get it passed at every level of government. We can bury Capitol Hill in post cards and shut down phone lines. We have learned how to find pro-life candidates, get them elected, and keep them accountable.

We have become experts in adoption law and in real estate, opening thousands of pregnancy help centers, often right next door to the local abortion center. We have honed our media skills and even become investigative journalists, going undercover to expose the hideous realities behind that anodyne word “choice.”

But we have not been able to crack the ultimate lock: the Supreme Court.

President-elect Donald Trump has promised to open that lock.

In 1973, the Supreme Court wrenched the abortion issue out of the hands of the American people and for over 40 years it has overruled most of our efforts to protect and aid women and their unborn children. On this, the most important social policy of our time, the people have been disenfranchised.

We have tried to change the makeup of the court. Judge Robert Bork would have been an outstanding addition, but the bullies on the left and their media allies took his excellent record and turned it into a bludgeon to beat not only the man but also the process.

In the end, it was Justice Anthony Kennedy whom the Republicans put on the bench, the man whom history will credit with saving Roe v. Wade when it was at its weakest.

For many years, the Republican establishment eschewed anything close to a “litmus test” for vetting, or voting on, Supreme Court justices. The Democrats, it should be noted, did not feel so constrained. After all, the anti-litmus test fervor was created by the left precisely to hamstring Republicans on the issue of abortion.

Republicans dutifully played their part. President George H. W. Bush promised that abortion was not a consideration in his nomination of David Souter—indeed, that he didn’t even know the nominee’s views on the issue—even while President Bill Clinton would three years later nominate the card-carrying ACLU attorney Ruth Bader Ginsburg, whose pro-abortion views were a mystery to no one.

More recently, both parties have been more circumspect when it comes to abortion. The wrangling over “stare decisis” and “privacy” in nomination hearings is a proxy for fighting over Roe.

Trump, not being a Washington insider, or even a politician, didn’t play his part. He probably didn’t even know there was a script. He blithely said he would appoint pro-life justices, and even produced a list of them in advance.

Judging from the list, we can understand that “pro-life justice” for Trump means a constitutionalist who realizes Roe v. Wade is bad constitutional law, not an activist bent on legislating from the Supreme Court bench.

The decision to release a list of potential appointees for the Supreme Court was utterly unprecedented—and a stroke of genius, judging from the exit polls. One in five voters said the Supreme Court was a major factor in their choice for president, according to an ABC News exit poll, and, of those, 57 percent chose Trump.

When Trump takes office, immediately he will have one seat on the Supreme Court to fill, that of the late Justice Antonin Scalia. That first nomination, however excellent it may be, will simply reinstate a divided court that turns on Justice Anthony Kennedy’s swing vote (last term, Kennedy voted with Democratic nominees Stephen Breyer and Elena Kagan 90 percent of the time).

By the end of his first term, four justices will be over 70 years old and three will be over 80. One of those will be Ginsburg, another will be Kennedy—two jurists whom conservatives most want to bid adieu. A Trump replacement of these two seats would begin to alter the court.

We can’t know the cases a Trump Court will hear, but consider the stinging pro-life defeats from just the past year.

In Whole Woman’s Health v. Hellerstedt, the court ruled 5-3 that a Texas law improving abortion safety standards at abortion clinics, and requiring abortion doctors to have hospital admitting privileges, was an unconstitutional violation of a woman’s right to choose abortion. Would a Trump court allow the citizens of a state to establish such safety standards? Probably.

The court also refused to review Stormans v. Wiesman, leaving in place a lower court ruling that gives Washington state the power to force pharmacists to peddle potentially abortion-inducing drugs, like Plan B, against their sincere conscience objections.

In dissent, Justices Samuel Alito, John Roberts, and Clarence Thomas called the case “ominous.” We can expect a Trump court to show far greater respect for conscientious objection to participating in abortions.

And let’s not forget the Little Sisters of the Poor, who appealed to the Supreme Court for relief from Obamacare’s Department of Health and Human Services mandate to provide contraception and abortion-inducing drugs in their employee health insurance plans. A majority of the court punted Zubik v. Burwell until after the election (probably due to the absence of Scalia).

No need to ponder what a Trump court would do here, if Trump dispenses with the heavy-handed Department of Health and Human Services mandate by executive action.

Will a Trump court be able to correct the anti-democratic, anti-constitutional Roe v. Wade? We have reason to be cautiously optimistic. That would not make abortion illegal; it would mean the work of abortion policymaking would be returned to the hands of the people in the states, where it was always meant to be.

Forty years is a long time. But with the election of Donald Trump, the American people finally have real hope that, in our lifetimes, we will once again have a voice and a vote on abortion.