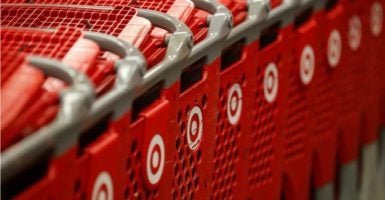 A website advocating a boycott of Target was shut down. (Photo: Kamil Krzaczynski/Reuters /Newscom)

The conservative group 2ndVote has called for a boycott on Christmas shopping at the retail giant Target over its bathroom policies. But on Nov. 23, Leadpages, the company hosting the #AnywhereButTARGET boycott campaign’s website, sent 2ndVote an email requesting the page be taken down.

In his email to 2ndVote, Leadpages’ director of operations, Doug Storbeck, stated that the campaign website violated the company’s terms of service, specifically, the portion prohibiting any content that is “hateful or discriminatory based on race, color, sex, religion, nationality, ethnic or national origin, marital status, disability, sexual orientation or age or is otherwise objectionable.”

In his email to 2ndVote, Storbeck also wrote:

At Leadpages, we strive to create an inclusive workplace that upholds the dignity of all people. We value, respect, and celebrate everyone’s individualities and honor their unique strengths from all different walks of life.

“Leadpages must have sensed our campaign was gaining momentum so they resorted to the typical liberal bully tactics of shutting down and censoring ideas they don’t agree with and calling them ‘hateful’ or ‘discriminatory,’” Robert Kuykendall, 2ndVote’s director of communications, said in a statement.  “Apparently, Leadpages wanted to use the cover of Thanksgiving Day thinking they could quietly make #AnywhereButTARGET disappear.”

“Liberals who constantly tout tolerance and inclusion go out of their way to shut down ideas they disagree with” Lance Wray, executive director at 2ndVote, said in a statement.  “To say our campaign is about inequality, intolerance, hate, discrimination, or devaluing anyone is flat wrong, it’s about common sense and safety. But, some of the truest hate and intolerance we’ve seen has come from the liberal responses to our campaign.”

After being shut down on Thanksgiving Day, the #AnywhereButTarget website is now back up. Target did not respond to a request for comment from The Daily Signal.

2ndVote has released a Christmas shopping guide for conservative buyers.