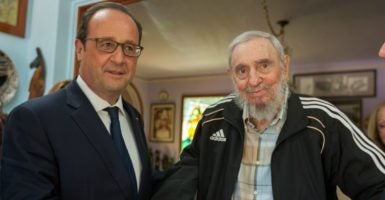 College students in the nation’s capital thought it was a “tough question” whether former Cuban President Fidel Castro or American President-elect Donald Trump is more favorable.

Campus Reform, a project of the Leadership Institute, polled several students at American University in Washington, D.C., and captured the students’ responses in the video below.

Many students could not give a clear answer whether they thought Castro, the Cuban dictator who died last week, or Trump was a better leader.

Some of the American University students told Campus Reform they favored Castro over Trump.

“I would say at this very moment, I have a better opinion of Fidel Castro,” one female student said in the video.

As The Heritage Foundation’s Ana Quintana wrote in an op-ed piece for The Daily Signal, “Religion was criminalized, dissent was violently punished, and Cuban citizens became property of their communist state” under Castro’s rule.

One student told Campus Reform she didn’t have an opinion on either man.

“I never really had an opinion on [Castro] to start with other than he was really, really bad for the world,” the student said. “Donald Trump, I still don’t have any opinion on. I just choose to ignore it.”

If Cuba is unwilling to make a better deal for the Cuban people, the Cuban/American people and the U.S. as a whole, I will terminate deal.

Another student said that if Trump’s administration “is anything like he said it will be, then I think that Fidel Castro will absolutely have been a better leader to the Cuban people than Trump will be to the U.S., just based on his statements alone.”