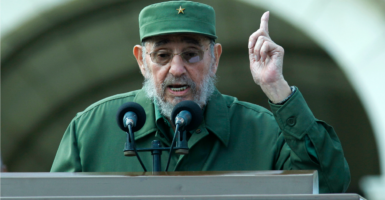 You will hear some people today excuse Fidel Castro’s crimes by begging that he accomplished social goals. Canada’s Prime Minister Justin Trudeau and British Labour leader Jeremy Corbyn have already beclowned themselves on that front. They were merely the first.

Our own President Barack Obama opted for washing his hands, choosing to neither praise Castro after his death Friday, nor to condemn the tragedy his communist dictatorship has inflicted on the Cuban people for 57 years.

“History will record and judge the enormous impact of this singular figure on the people and world around him,” said Obama, playing Pilate.

No social accomplishment, to be sure, could justify keeping an entire people hostage, denying them the right to elect their own leaders or exercise any human rights for half a century. But there weren’t any accomplishments.

On the contrary, Castro destroyed a thriving society and imposed penury, either out of Marxist dogma or out of resentment that his out-of-wedlock birth had left him with a stigma among Cuba’s middle classes.

Cuba had problems in 1958, as many societies do. But on a number of fronts, it was the lead country in Latin America, or among the very top. Its social indicators were not just ahead of Asia and Africa, but also ahead of many European countries.

Many Europeans, including half of all my great-grandparents, immigrated to Cuba in the 20th century—barely a century ago—seeking to improve their lives economically. They did, and their granddaughter, my mother, went to law school.

After 57 years of communism it is risible to think of a single European immigrating to Cuba to improve his fortunes. Risible in a dark, macabre way.

That’s anecdotal, but the numbers back up what 2 million Cuban-Americans today (i.e., Cuban-born people who can speak freely) know to be true.

A study by the State Department’s Hugo Llorens and Kirby Smith shows, for example, that in infant mortality, literacy rates, per capita food consumption, passenger cars per capita, number of telephones, radios, televisions, and many other indicators, Cuba led when Castro took over on New Year’s Eve 1958.

In food consumption, in terms of calories per day, Cuba was ahead of all of Latin America except cattle-rich Argentina and Uruguay. In automobiles per 1,000 inhabitants, Cuba’s 24 was ahead over everyone in Latin America expect oil-producing Venezuela (27).

As for literacy rates, Cuba’s 76 percent in the late 1950s put it closely behind only Argentina, Chile, and Costa Rica. Giant Brazil’s percentage, by comparison, was 49 percent.

And Cuba’s gross domestic product per capita in 1959 was higher than those of Ireland, Italy, Spain, Portugal, Greece, most of Latin America, Asia, and Africa, again according to U.N. statistics.

In most vital statistics, therefore, Cuba was on a par with Mediterranean countries and southern U.S. states.

And today? Castro’s communism has not just left Cubans economically pauperized, but politically bereft, a situation that Obama’s unilateral concessions to Castro’s little brother, the 85-year-old Raul, Cuba’s present leader, has only made worse.

According to the Cuban Committee for Human Rights and National Reconciliation, which is recognized by Amnesty International and Freedom House, so far this year there have already been over 8,505 political arrests during the first eight months. This represents the highest rate of political arrests in decades.

Meanwhile, we are in the midst of a new Cuban migration crisis. The United States is faced with the largest migration of Cuban nationals since the rafters of 1994. The number of Cubans fleeing to the United States in 2015 was nearly twice that of 2014.

Some 51,000 Cubans last year entered the United States, and this year’s figures will easily surpass that. The numbers of Cuban nationals fleeing Cuba have now quintupled since Obama took office, when it was less than 7,000 annually.

President-elect Donald Trump has promised he will reverse Obama’s opening unless Raul Castro opens up Cuba politically. This Castro won’t do and there were reports today that dissidents are being rounded up and carted off.

And so far, Trump’s statement on the “brutal dictator” Castro has been the moral one and the one closest to the mark: “Fidel Castro’s legacy is one of firing squads, theft, unimaginable suffering, poverty and the denial of fundamental human rights.”

Today, therefore, will be a day for clarity. What world leaders say about the departed tyrant will reveal whether they have an inner moral compass or not.