What You Need to Know About Gov. Nikki Haley, Trump’s Pick for UN Ambassador 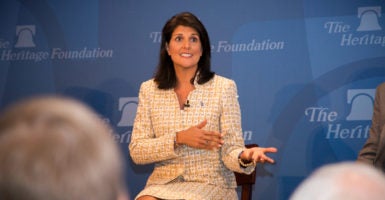 “Gov. Haley has a proven track record of bringing people together regardless of background or party affiliation to move critical policies forward for the betterment of her state and our country,” Trump said in a statement Wednesday. “She is also a proven dealmaker, and we look to be making plenty of deals. She will be a great leader representing us on the world stage.”

Haley, considered a rising star in the Republican Party, was elected to serve as governor of the Palmetto State in 2011. She is the first female and the first minority to hold the post.

The governor accepted the ambassador position Wednesday morning and said she felt she had a “sense of duty” to do so.

“When the president believes you have a major contribution to make to the welfare of our nation, and to our nation’s standing in the world, that is a calling that is important to heed,” Haley said in a statement.

The president-elect’s pick of Haley to serve as the U.S. ambassador to the United Nations also makes her Trump’s first female Cabinet selection.

Haley will remain governor until the Senate confirms her nomination.

The daughter of Indian immigrants, Haley, 44, campaigned for Sen. Marco Rubio, R-Fla., during the primaries, appearing with him often before her state’s contest in February. After Rubio withdrew from the race, she endorsed Sen. Ted Cruz, R-Texas.

She was viewed as a possible vice presidential pick during the primaries.

Haley didn’t shy away from criticizing Trump during his time on the campaign trail. Though she didn’t mention his name explicitly, Haley took aim at the former businessman when she delivered the Republican response to President Barack Obama’s State of the Union in January.

During her speech, Haley encouraged her fellow Republicans to move away from following the “angriest voices,” which many viewed as a criticism of Trump.

For his part, the president-elect hasn’t always been kind to Haley. In January, Trump said the South Carolina governor’s stance on immigration—a cornerstone of his campaign—was “very weak,” and in March, he took to Twitter to criticize Haley.

Despite trading jabs, Haley said in October she would vote for Trump, and the two were friends prior to the election. At an annual meeting of the Republican Governors Association earlier this month, Haley said she was “giddy” about the GOP controlling both chambers of Congress and the White House.

“Our country faces enormous challenges here at home and internationally, and the president-elect has asked me to join his team and serve the country we love as the next ambassador to the United Nations,” Haley said in a statement announcing her selection to the post.

Haley was praised for her leadership after a shooting at the Emanuel African Methodist Episcopal Church in Charleston, where a white supremacist killed nine people during a prayer service last year.

In the days following the horrific shooting, Haley called for the Confederate flag to be removed from the grounds of the state Capitol.

“These grounds are a place that everybody should feel a part of,” she said last year. “What I realized now more than ever is people were driving by and felt hurt and pain. No one should feel pain.”

From 2005 to 2011, Haley served in the South Carolina House of Representatives representing Lexington County, and then went on to serve as governor.

Haley has been praised for her work in bringing more jobs to South Carolina and, according to Trump’s transition team, brought the state’s unemployment rate to a 15-year low.

However, she hasn’t held a role in the federal government and doesn’t have much experience in foreign policy.

According to The Post and Courier, the governor’s work abroad centers mostly on her negotiations with international companies looking to move into the Palmetto State. She’s also led seven trade missions overseas during her time as governor.

If the Senate confirms Haley, she’ll succeed Samantha Power, who became the U.S. ambassador to the United Nations in 2013.

Haley was born in Bamberg, South Carolina, to Indian immigrants and grew up working in her family’s business. She graduated from Clemson University, and married Michael Haley, a captain in the Army National Guard who deployed to Afghanistan for nearly a year in 2013. They have two children.