Why Jeff Sessions, ‘an Advocate for the Constitution,’ Has Conservatives So Excited 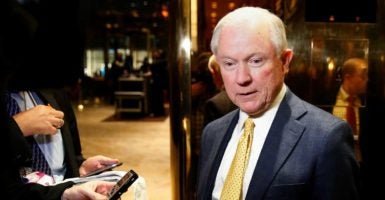 Sen. Jeff Sessions, R-Ala., will be soon be facing a confirmation hearing in the Senate after President-elect Donald Trump announced Friday he would nominate Sessions for the job. (Carlo Allegri/Reuters/Newscom)

As attorney general, Jeff Sessions could go a long way toward reversing the politicization of the Justice Department that occurred under the Obama administration, Republican senators and conservative activists said Friday, after President-elect Donald Trump announced he is nominating the Alabama Republican senator for the nation’s top law enforcement job.

“Sen. Sessions’ solid understanding of the Constitution and firm commitment to the rule of law is exactly what the Justice Department needs,” Sen. Mike Lee, R-Utah, a member of the Senate Judiciary Committee, said in a statement. “I have worked closely with Sen. Sessions on the Judiciary Committee over these past six years and I have every confidence that he will make a great attorney general for all Americans.”

“A principled and good man, he will restore honor to a department that, under President [Barack] Obama, perpetually pushed a political agenda while neglecting to enforce the law,” Cornyn said in a statement.

“He will restore honor to a department that, under President Obama, perpetually pushed a political agenda,” @JohnCornyn says.

“For nearly eight years the Justice Department has twisted the Constitution and the laws passed by Congress to further the president’s liberal agenda, eroding our liberty in the process,” said Cornyn, also a Judiciary member. “It has put politics ahead of national security, and demonized those who protect us. It’s time to end the politicization of the Justice Department and start defending the rule of law, and I’m confident that as our top law enforcement official Senator Sessions will do that.”

During the Obama administration, Holder fended off an investigation into the Operation Fast and Furious gunwalking program, and was found in contempt of Congress for refusing to provide thousands of documents to congressional investigators.

In the 1980s, Sessions was a U.S. attorney and was nominated but not confirmed to a federal judgeship. So, this will be the third time Sessions will face a Senate confirmation.

Senate Judiciary Chairman Chuck Grassley, R-Iowa, is “confident he would be reported favorably out of the committee” because of his legal background.

“Sen. Sessions is a respected member and former ranking member of the Judiciary Committee who has worked across the aisle on major legislation,” Grassley said. “He knows the Justice Department as a former U.S. attorney, which would serve him very well in this position.”

However, this time it still might not be easy.

Among the liberal groups opposing the nomination is the Leadership Conference on Civil and Human Rights.

“This nomination is deeply troubling to Americans who care about equal protection under the law,” the organization’s president Wade Henderson said in a statement. “Throughout his tenure in the Senate, Sen. Sessions has been one of the chamber’s leading antagonists of immigrants and the LGBT community, continuing his long record of obstructing civil rights that began in his tenure as U.S. attorney for the Southern District of Alabama.”

The confirmation hearing will be missing one Republican on the Judiciary panel—Sessions.

The committee’s top Democrat, Sen. Patrick Leahy, D-Vt., said the hearing is of particular importance because Trump “has proposed religious tests, a return to torture, and a deportation force that threatens to remove millions of immigrants.”

“Sen. Sessions and I have had significant disagreements over the years, particularly on civil rights, voting rights, immigration, and criminal justice issues,” Leahy said. “But unlike Republicans’ practice of unprecedented obstruction of President Obama’s nominees, I believe nominees deserve a full and fair process before the Senate. The American people deserve to learn about Sen. Sessions’ record at the public Senate Judiciary Committee hearing.”

The confirmation should be swift, said Senate Majority Leader Mitch McConnell, R-Ky., who asserted he strongly supports Trump’s nomination, and noted Sessions’ record of working with Democrats such as Illinois Sen. Dick Durbin, and the late Massachusetts Sen. Ted Kennedy on major legislation.

I strongly support President-elect @realDonaldTrump‘s selection of @SenatorSessions as #AttorneyGeneral & look forward to his confirmation. pic.twitter.com/AkdDgoKO3P

“Sen. Jeff Sessions’ nomination as attorney general is great news for all of us who revere the Constitution and the rule of law,” Cruz, a Judiciary member, said in a statement. “I have been honored to work with Sen. Sessions on many of our nation’s most important issues over the last four years. Sen. Sessions has had an extraordinary career in government and law enforcement. He has been an exemplary senator for the state of Alabama, and I am confident that he will be an exceptional United States attorney general.”

.@SenatorSessions is a fine, decent man & principled conservative. He has the experience and ability to serve as Attorney General of the US.

A former Sessions colleague, Jim DeMint, now president of The Heritage Foundation, said Sessions will defend the freedom and safety of Americans as attorney general.

“No one will work harder than Jeff Sessions to defend the freedoms and safety of all Americans as attorney general. He is not intimidated by the liberal media or the Washington establishment,” DeMint said in a statement. “He has the courage and the proven record to take on special interests. He is passionate about defending the Constitution and the rule of law to protect the rights of everyone. Jeff has been such a great friend to me and many others, becoming one of the most respected leaders in the Senate and should easily be confirmed.”

Conservative activists, such as Tea Party Patriots co-founder Jenny Beth Martin, were also excited by the news, noting the DOJ’s leftward shift under the Obama administration.

“For eight years under President Obama, the Justice Department prioritized politics over the rule of law,” Martin said. “Under Sen. Sessions, we know the rule of law will finally be paramount again with our nation’s highest-ranking law enforcement officer. We look forward to supporting Sen. Sessions during his confirmation process and working with him once he takes the oath of office as our next attorney general.”

Sessions’ record as U.S. attorney, Alabama attorney general, and in the Senate makes him a strong nominee, said Penny Nance, president of Concerned Women for America. She added the nomination speaks well to Trump’s commitment to conservative principles.

“The thousands of members of Concerned Women for America around the country will urge senators to move quickly in the new year to confirm Sen. Sessions as the next attorney general, so that we may start rectifying many of the asphyxiating policies pursued by Attorney General Eric Holder and Loretta Lynch,” Nance said in a statement. “The attacks on religious freedom and freedom of conscience in general, for example, must be atop of the list.”

Sessions has been a strong conservative advocate and is an indicator potential future appointments, said Frank Cannon, president at American Principles Project.

“On life, education, religious freedom, sound money—really, across the board—Sen. Jeff Sessions has proven himself to be an advocate for the Constitution and for the hardworking people of this great nation. We expect he will do an excellent job as attorney general,” Cannon said.