Dismantling Dodd-Frank: How Congress Can Begin to Restore Financial Security 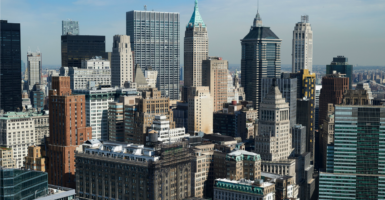 Dodd-Frank does not in fact rein in the forces of Wall Street and protect everyone else. (Photo: Cameron Davidson Westend61/Newscom)

President-elect Donald Trump campaigned on the promise of dismantling Dodd-Frank, and now Senate Democrats are pretty much the only thing that can derail that promise.

This week, key Democrats on the Senate Banking Committee indicated they want little to do with dismantling the 2010 law. But in their rush to save Dodd-Frank, they’ve shown just how badly they misread what bills like Dodd-Frank actually do.

Brown told reporters: “If Donald Trump starts doing the bidding of Wall Street, then the voters in Ohio who voted for him will realize that he’s joined the Republican establishment here in advocating the billionaire’s agenda.”

That’s completely backward because Dodd-Frank does not in fact rein in the forces of Wall Street and protect everyone else.

Dodd-Frank does impose large volumes of complex rules on financial companies, but the largest (and best-funded) of those firms have the easiest time complying with the regulations, while smaller firms and consumers are hit the hardest.

Dodd-Frank does not empower “those who don’t have a voice in Washington, D.C.” It empowers an army of lobbyists and lawyers, since they’re the ones who get paid to secure the best possible deals for their clients. Naturally, it also empowers the senators and congressmen that these lobbyists call upon.

Under Dodd-Frank, the people on Main Street pay higher prices for loans, have a harder time getting loans, and get stuck paying for bailouts and federal guarantees.

Democrats have perpetuated the myth that deregulation caused the 2008 financial crisis, but that is absurd on its face. The claim looks even more baseless to anyone who bothers to check the details, since there has never been any substantial deregulation of financial markets in the U.S.

Even a mild investigation into the post-1999 world, when the Gramm-Leach-Bliley Act supposedly deregulated the big banks, clearly shows that the volume of regulation only increased. (Figure 1)

A deregulated financial system is not what imploded in 2008. Financial markets—not just banks—were full of minimum capital rules, liquidity rules, disclosure rules, leverage rules, bankruptcy exemptions for derivatives, and the constant threat that regulators would make up new rules. The nation’s largest banks had federal regulators literally embedded in their headquarters on a daily basis.

Worse, everyone expected the federal government to step in and pick up the pieces if something went wrong. At the very least, people expected an expansion of FDIC deposit insurance coverage (well beyond what anyone on Main Street needs), and some kind of “emergency” funds from the Federal Reserve.

The large financial firms’ creditors had every reason to expect what most of them ended up with: special loans and taxpayer guarantees. When federal policies are chiefly geared toward “keeping the system going,” the market knows bailouts are coming. And that’s a major problem with the regulatory system that Dodd-Frank worsened.

People on Main Street understand, though, that this kind of system—one that is highly regulated and uses taxpayer money to cover losses—will never provide financial security for anyone other than the largest financial firms.

They can see what’s going on in Washington.

They know that bailing out the titans of finance actually costs them money, and they’re not buying the notion that adding yet more rules in the name of protecting Main Street will actually work. And they’re right to be so skeptical.

If the Democrats on the Senate Banking Committee really want to improve financial security for Americans, they’ll convince their colleagues to go back to the drawing board.

Then, they can get to work fixing the system the way they should have after the 2008 crash. They can get rid of the ridiculous rules that let regulators micromanage financial companies, and they can put safeguards in place to make bailouts less likely.

That means financial firms’ owners and creditors will have to absorb financial losses, and they won’t like that. And that’s proof that truly fixing financial regulations is anything but establishment-friendly.